At UC-Davis, Undocumented Students Get Free Legal Help From Clinic 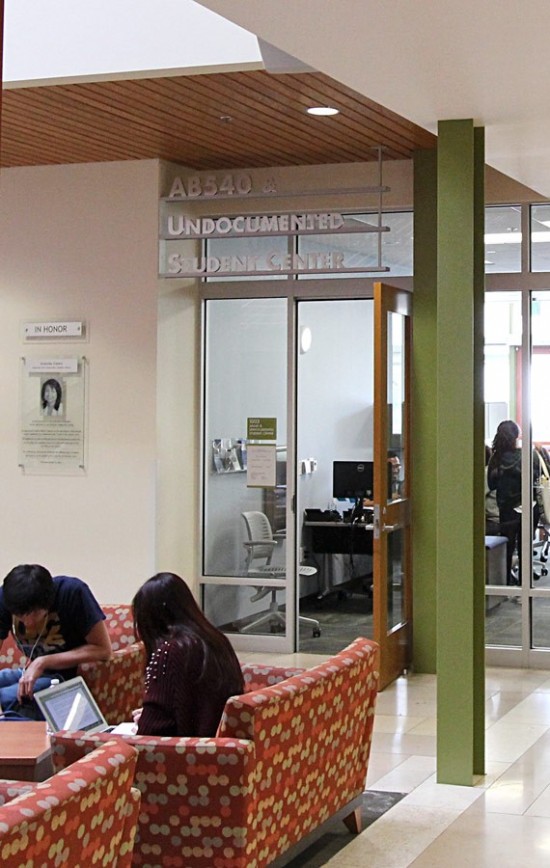 Outside California, the term “AB 540 student” may be nothing if not arcane. Inside the state, though, it has become a virtual identity for thousands of undocumented immigrants benefitting from a 13-year-old law that allows them to pay the lower college tuition usually reserved for California residents.

From that perspective, it’s an ideal choice for the name of an office at the University of California-Davis dedicated to the unique needs of those students: the AB540 & Undocumented Student Center, which opened this month. Through a partnership with the law school’s immigration clinic  – the first of its kind in the University of California system – the center will provide free legal services to undocumented students and their families.

The law school  is simultaneously developing an initiative for its immigration clinic to provide such services to schools in the University of California system that don’t offer law degrees, Dean Kevin Johnson said in a telephone interview. Those include UC-Merced, UC-Santa Cruz, UC-Santa Barbara and UC-San Diego.

“As far as I know, this is the only relationship in which an immigration clinic at a law school guarantees representation to a university’s undergraduates,” Johnson said. “The idea is to offer a full array of legal services depending on what they need, and we’ll see what comes in the door in the future, and we’ll respond.

The AB540 office was funded in part with $500,000 from the University of California system. The money was UC-Davis’s share of a $5 million allocation by University president Janet Napolitano to help undocumented students throughout the system.

At that time, the university – which comprises 10 campuses – estimated that it had 900 undocumented students altogether, about 95 percent of whom were undergraduates. Statewide, as many as 24,000 undocumented students graduate from high school in California ever year, compared with 65,000 nationwide, according to estimates on the university’s website.

“It seems to me that undocumented students are going to be part of our student body for years, if not generations, to come,” Johnson said. “The question, and it’s an important one, is how do we best serve their needs and ensure that they’re feeling included in an overall community.”

Students without lawful residency status face unique hurdles, from ineligibility for financial aid to filling out documents without a Social Security number and the inability to obtain a driver’s license.

“The challenges that undocumented students face are hard to understand unless you are one,” Johnson said. “But getting through college, I found to be difficult and I didn’t have to deal with things like worrying about being deported, worrying about being eligible for financial aid and loan programs, and worrying about my family if they ended up in the same predicament.”

Along with legal services, the AB540 center offers academic advice, access to counseling, scholarship information and financial advice. It’s staffed by a director and student workers, as well as a legal Fellow, Marcus Tang, who splits his time between the center and the immigration clinic.

A 2014 graduate of UC-Davis Law, Tang works under the supervision of the clinic’s attorneys, helping students with various issues, such as first-time and renewal applications for the Obama administration’s Deferred Action for Childhood Arrivals program, which delays government action against undocumented residents, and obtaining lawful resident status. Other students are already legal residents and interested in becoming U.S. citizens.

A “big piece of this vision is that as I’m meeting with people about whatever they come in for, I’m also screening for other forms of immigration relief for which they may be eligible,” Tang said. In one early case, for example, Tang was able to help a client who was seeking to renew deferred-action status begin working on lawful permanent resident status.

“Neither of us anticipated it at the beginning of the meeting, but through the screening, we were able to realize that she had this other form of relief, which is much stronger,” he said.

Demand for services like the UC-Davis program is likely to rise as the number of undocumented immigrants in the U.S. increases, in part because of a surge in unaccompanied youths crossing the southwestern U.S. border. Their numbers rose 77 percent in the 12 months through Sept. 30, reaching 68,541, according to U.S. Customers and Border Protection.

Nationally the number of undocumented residents climbed 36 percent to 11.5 million in the 11 years through January 2011, the most recent statistics available, according to U.S. Department of Homeland Security records. About 25 percent of these individuals lived in California, the records show.

Since planners of the UC-Davis center anticipated that some students would be wary of sharing their undocumented status, Tang worked closely with the staff to make sure prospective clients understand how to maintain attorney-client privilege.

And while he meets with undocumented students at the center, actual casework is handled in the immigration clinic’s office, in a separate building, to ensure the confidentiality of documents prepared on software and printed.

“Asking students to go to the clinic, which is on the outskirts of campus, is a very different trust-building request than saying that you can just meet with an attorney in the center itself,” Tang said. “We’re thinking that once they’ve built that trust in me through out first conversation or interaction, they’ll trust us enough for us to say, ‘Let’s make an appointment. Unfortunately, we have to meet at the clinic.’”

Undocumented students are also afforded some protection under the Federal Educational Rights and Privacy Act, which limits disclosure of their information, including immigration status, in most cases.

“Some of the students prefer not to have their status known, and other students either don’t care about their status being known or want their status to be known,” said Johnson, the dean. “There’s a lot of individual choice that has to be made about the degree of risk that you’re comfortable with.”

Tang, who sat for the bar exam in July and is waiting for the results, said most of the students he’s seen so far have been reasonably confident, though he recognizes there may be others still too timid to come in.

“A lot of the time, in the national rhetoric and the national media, we’re focused on deportation, and certainly that’s a huge issue, but at the same time there are plenty of folks who are not being deported but who are still facing all types of hardships,” Tang said. “To be a part of a project that’s trying to mitigate the effect of those challenges is very exciting to me, and part of a very comprehensive approach to dealing with problems that our immigration system has created for people.”