A veterans spending package that the U.S. Senate will consider after its return from a weeklong Memorial Day recess includes $159 billion for the Department of Veterans Affairs to improve its health-care services as well as a suggestion: Take advantage of help from law school clinics to curb a backlog of disability claims.

The proposal is backed  by two Virginia senators who cite the Puller Veterans Benefits Clinic at the state’s William & Mary Law School as an example. It comes amid a firestorm of criticism over lengthy wait times at Veterans Affairs hospitals and a backlog that comprises more than 51 percent of outstanding disability claims from military service personnel. 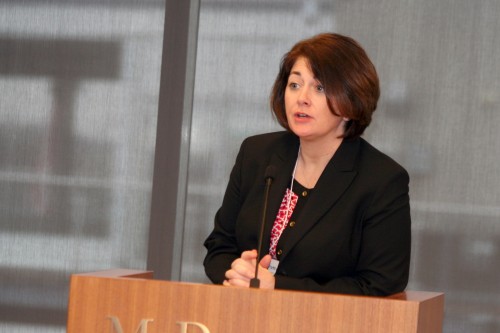 The appropriations bill offers assistance in achieving that goal, providing $5 million more than was requested by the department’s inspector general to conduct a nationwide investigation of scheduling practices and procedures, Senator Tim Kaine, D-Va., said in a statement.

“I’m particularly pleased the bill prioritizes the well-being of our veterans through increased funding to eliminate the disability claims backlog and improve health care, as well as through support for programs – like William & Mary Law School’s Puller Clinic – that help veterans efficiently navigate the VA benefits process,” said Kaine, who promised to back the proposals as the full Senate considers the bill.

The Puller Clinic, the first in the nation to be certified by the Veterans Affairs Department as a national “best practice” program, focuses on veterans whose disability claims were denied by their regional offices, the starting point in the claims process. More than 140 students have participated in the semester-long clinic in the past six years, helping 68 individual veterans, said Patty Roberts, director of clinical programs at William & Mary Law.

About 30 percent of the school’s almost 400 second- and third-year students participated in faculty-supervised clinical courses during the 2013-14 academic year, according to data compiled by Lawdragon. The school offers nine altogether, including the Puller Clinic, which traces its start to the experiences of two alums, Stacey-Rae Simcox and Mark Matthews, who served in the Army Judge Advocate General Corps.

Both went through the claims process themselves, found it daunting and thought, “If it’s this hard for us, two law school graduates, imagine how hard it is for other veterans,” Roberts said. Simcox, a professor of law practice at William & Mary, and Matthews, an adjunct professor of law who works in private practice, are now managing attorneys for the clinic.

After Simcox initially proposed a clinic to benefit veterans six years ago, the law school decided to team with the Center for Psychological Services and Development at Virginia Commonwealth University in Richmond.

“We thought if we were going to help the veterans we would see with their benefit claims, we might want to help them not just legally but psychologically,” since many are grappling with issues such as post-traumatic stress disorder,  traumatic brain injury and substance abuse, Roberts said.

The clinic focuses on claims being reviewed at regional offices because fewer resources are available to veterans there than at various appellate levels of the process, and filing a thorough initial claim that meets all the regulatory requirements can speed benefits.

“We characterize it as being very helpful and collaborative to the VA because when we send in the package, it’s a very comprehensive claims package,” Roberts said. “It has all of the evidence that the VA needs to make a determination, and so they should be able to do that more efficiently because everything’s in front of them.”

The cases that the clinic handles still take 18 months to two years to complete, she said. The process is complex enough that a veterans benefits manual published by the National Veterans Legal Services Program is more than 2,000 pages, yet it’s being navigated by injured servicemen and women who may have psychological or neurological disorders or injuries that inhibit their abilities, Roberts said.

With the help of Sen. Mark Warner, D-Va., the Puller Clinic has pushed for increased cooperation from the Veterans Affairs Department and in April held its first national conference for law clinics serving veterans in Washington, D.C.

The Puller model has been extended to an additional 15 law schools across the country, Warner said at the conference, and may be expanded further, which “will help the VA continue in its efforts to move more quickly through its backlog while helping law students develop new skills and an appreciation for pro bono service.”

Pushing a denied claim through the various appeals can take up to seven years. Once veterans reach that point, a variety of legal assistance programs are available, but “most veterans don’t get that far,” Roberts said.

Aaron Petters, a rising 2L, was drawn to a summer research position at the clinic after an arduous experience with the VA while trying to claim the post-9/11 benefits given to him by his father, who’s on active duty in the Air Force.

“The process of trying to go through the VA to get those was just horrendous,” Petters, who completed his undergraduate degree at Brigham Young University in Provo, Utah, recalled in a telephone interview. “That made me realize that there was a problem, and then when I saw the opportunity to come here and work at the clinic, I jumped at the chance.”

Petters, whose goal is to work with the Air Force JAG Corps, said some clients have seen their conditions worsen as they age and are now seeking more benefits. Others deserved higher benefits when they filed their initial claim but were overwhelmed by the complexity of the process.

“The VA system is just very, very hard to work through, and so these are guys that way back when they had to start, there really weren’t programs to help them out ,” he said. “Now that there are these kinds of programs, they’re coming to us and we’re able to help get them the benefits that really, they should have had from the beginning.”

“Working here, even for the short time that I’ve been here, has really made it clear how important it is for people in the legal community to reach out and help people who need it,” said Harrison, a resident of Flanders, N.J. “It’s amazing that these veterans are able to navigate through the VA on their own, as is.”

Not only does the experience give students an appreciation for pro bono work, it provides valuable training in administrative law as a whole, said Scott Krystiniak of Ann Arbor, Mich., also a rising 2L working in the clinic this summer.

“It’s really equipping us with some skills that we can take elsewhere and utilize,” Krystiniak said. “The opportunity to give back to people who have certainly earned it is definitely going to frame how I think all of us are going to approach pro bono work in the future.

“These veterans are getting papers regarding decisions where even we can look at them and it’s tough to really decipher what’s going on,” he said. “So for your average veterans to come through and try to tackle these on their own, it’s certainly not surprising that there have been issues and that a lot of people struggle with them.”