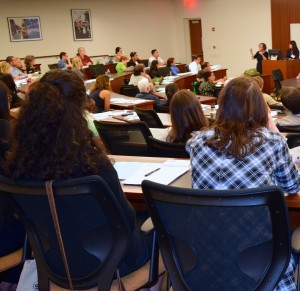 Lenni Benson recognizes the parallels between her family’s history and the stories of her Safe Passage Project clients, child immigrants who must navigate a complex legal system to stay in the U.S. after a dangerous journey without their parents.
The youths, many of them from Honduras, El Salvador and Guatemala, are part of a surge in juveniles seeking to cross the U.S. southwestern  border that has prompted calls from Congress for tighter patrols and more aggressive deportation.

Their numbers have more than tripled in the past five years, reaching 57,000 in the nine months through June 30, according to U.S. Customs & Border Protection. “This newest phenomenon of children at the border is bringing a lot of attention to a problem that’s been around for hundreds of years,” said Benson, a New York Law School professor who founded Safe Passage in 2006. A pro bono clearinghouse, it matches volunteer attorneys with law students to represent immigrant children seeking legal residency in the U.S.

The program, which is based at the Tribeca school but operates independently, is seeking to raise at least  $200,000 to ensure its long-term sustainability and to add administrative support as its caseload grows, Benson said. As many as 200 attorneys are affiliated with it. Organizers hope for at least 80 student volunteers in the 2014-15 academic year.

Demand for legal services, such as those provided by Safe Passage, has increased exponentially in the past several years, outstripping available resources, Juan P. Osuna, director of the U.S. Justice Department’s Executive Office for Immigration Review, said in a July 9 hearing before the Senate Appropriations Committee.

“The removal cases of unaccompanied alien children are often continued multiple times in order to allow a child the opportunity to seek legal representation,” he said.

While the U.S. offers many options for child immigrants that wouldn’t be available to adults, the children typically are both unaware of those opportunities and unfamiliar with the nation’s court system, so they need an attorney, Benson said.

The minors represented by Safe Passage have typically been picked up by border agents, turned over to the U.S. Department of Health & Human Services, then released to a relative or caretaker while their cases proceed through Immigration Court.

‘HELPING PEOPLE WHO REALLY NEED IT’

“You’re helping people who really need it,” said Janet Higbie, a 2005 New York Law School graduate who volunteered with the program. “They would probably be removed if they didn’t have some kind of assistance. They’d be deported right away.”

Some qualify for asylum, which offers a path to citizenship, because of persecution in their own countries linked to their race, religion or political opinion. Others may attain Special Immigrant Juvenile Status.

Under that system, children are allowed to apply for a green card in the U.S. if a juvenile court finds they can’t be returned to their parents because of abuse, abandonment or neglect, that returning to their home countries isn’t in their best interests, and grants custody to someone else.

The program’s mission “is to try to fill a gap the federal government has created because they are using the tools of enforcement and removal against these children,” who aren’t guaranteed legal representation, Benson said. Further, there’s political support for “people to be put in deportation proceedings,” she said. 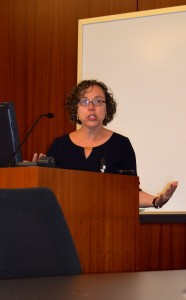 Benson’s own grandmother who traveled from Eastern Europe at age 7, along with her 4-year-old brother, was caught at New York’s Ellis Island processing center in 1907 and slated for deportation. A woman who had agreed to pose as their mother disavowed them. The two were held at Ellis Island for a week until the girl recognized an older sister who took them in.

“That’s how I was able to be born in this country,” Benson said. Her grandmother arrived in what would be a peak year for Ellis Island, when more than 1 million immigrants were processed, according to the Statue of Liberty-Ellis Island Foundation’s website.

Much like today, the influx of immigrants, many of whom didn’t speak English, prompted a backlash from portions of the U.S. population that eventually led to laws restricting arrivals from a wide swath of Europe and Asia. Such concerns have smoldered through American politics since the Colonial era.

Benjamin Franklin, a signer of the Declaration of Independence and the U.S. Constitution, sought to limit the arrival of German immigrants in Pennsylvania decades before the American Revolution. In the mid-19th century, so-called Nativists fought an influx of Irish Catholic immigrants. Later, Congress passed laws barring the immigration of Chinese laborers.

“I try to remember that what’s new is old,” Benson said. “There is sort of a natural sociological function of looking at the stranger and the newcomer, and when you see images of a lot of children at once – the rhetoric is ‘surge’ or ‘flood’ – there is a feeling of invasion.”

Still, 57,000 children over a span of months isn’t a surge by many international standards, Benson said. By the end of this year, for instance, Turkey will be housing as many as 1.4 million refugees from conflict-ridden regions including Syria, Iraq and Afghanistan, according to the U.N. High Commission for Refugees.

Not only does the U.S. have the capacity to process and evaluate the claims of child immigrants, she said, “we also have an international obligation, if someone reaches our shores, to not just toss them back without first evaluating whether they have a claim for protection.”

Because Safe Passage isn’t a clinical course, it can cast a wide net for students to assist in that effort. Past volunteers have come from Columbia and Fordham, as well as New York Law School, she said.

In addition to hands-on legal experience and practice in a courtroom, students have an opportunity to work with clients who aren’t able to get help anywhere else.

“To bring happiness to another person is often much more rewarding than having money,” said Gonzalo Landaverde, a rising 2L at New York Law who is an intern with the project this summer. That his own family immigrated to the U.S. from Mexico made the position even more appealing, he said.

“I felt as if it was the perfect opportunity for me to one, further skills that I had already attained in my first year of law school; two, learn more about immigration law; and three, help out people who were struggling, who were indigent, whose world was being turned upside down,” he said.

Landaverde’s position involves assisting attorneys who are conducting initial interviews to assess a child’s options before Immigration Court and, because he’s fluent in Spanish, serving as a translator. His legal studies to date allow him to be an informed interpreter, connecting children who speak little to no English with their attorneys who speak only English.

His undergraduate studies in psychology and his previous work in management helps him relate to kids and work with their particular communication styles.

He still recalls the smile on the face of the first client whose case he helped with, after receiving paperwork at the end of a long day in Family Court. It was a smile that said, “Finally, I feel like I’m having some progress, like I’m not drowning in these worries that I have on a daily basis.”

Landaverde came to New York planning on a career in business law, but he admitted the immigration work has proven alluring.

“If I could find a way to merge business law and immigration law, that would be my ideal position,” he said. “I really enjoy what I’m doing, and while I still have a passion for business, I could see myself being very happy doing this after graduating.”