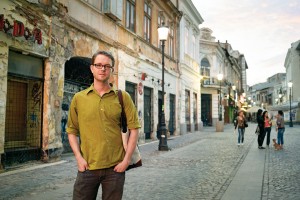 On a Northeastern law school co-op program in Bucharest, Romania last August, Adam Cernea Clark arrived just as thousands of protesters took to the street. The government was about to approve a private sector gold mining project that many Romanians feared would release cyanide into the environment. Cernea Clark, who studies environmental law and international development as part of Northeastern’s dual-degree program with Vermont Law School, said he felt compelled to get involved. He promptly embarked on a series of stories for publication in The Huffington Post, among other venues, so that a wider audience would learn about the issues:

The signature curriculum strength at Northeastern University School of Law is its Cooperative Legal Education Program. During a co-op, upper-level students alternate between academic quarters and co-op quarters, in which they work full-time for 11 weeks in legal practice settings and judges’ chambers throughout the world. Cernea Clark came to Bucharest for a co-op assignment with the firm Pop Pepa, now known as Pepa & Associates. He focused primarily on mergers and acquisitions, nondisclosure agreements and real estate transactions.

His wife, Silvia Cernea Clark, grew up in Romania and the two spent a year there after they graduated from college. Cernea Clark is currently an adviser with The Rich Coast Project, working on minority land rights issues in Costa Rica. He writes fiction and creates visual art in his free time.

ADAM CERNEA CLARK: The public interest focus of the school and the availability of work experience while I was attending law school – these were most important to me.

ACC: During my second year, I attended a colloquium on the social determinants of health that was held by my school’s Program on Human Rights and the Global Economy.

LD: What do you plan to do with your law degree? ACC: I want to work at the intersection of social and environmental issues, where the principal civil-society actors seem to be like ships passing in the night more often than not.