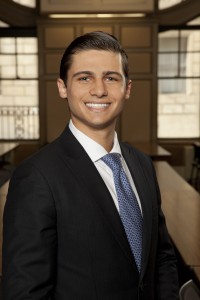 Paul Kossof, an International Business and Trade Law LL.M. candidate at The John Marshall Law School, has written what seems to be the first book on China’s new trademark law, which took effect in May 2014. “Chinese Trademark Law: The New Chinese Trademark Law of 2014” offers readers concise explanations and accompanying analysis for every amendment in China’s third revision of the law. Kossof also discusses how the amendments will affect China’s trademark legal practice, provides bilingual citations and has included the first published English translation of the new law.

Kossof has written many academic articles on the topic such as “The New Chinese Trademark Law,” which won the International Trademark Association’s 2014 Ladas Memorial Award.

His next book is “Chinese Legal Research.” Scheduled to be published in June, it presents the background, tools and tips needed to conduct effective legal research in China without necessarily knowing the basics of Mandarin.

Kossof will receive a J.D. degree with a certificate in Intellectual Property Law in May. He is expected to complete his LL.M. degree in January 2015.

PAUL KOSSOF: I chose The John Marshall Law School because of 1) Its strong intellectual property program, 2) Chinese Intellectual Property Center, 3) Its location in Chicago, since my family is from Chicago and I am relocating out of the U.S., and 4) The offer of a full scholarship.

LD: What do you plan to do with your law degree? Have your plans changed since starting law school?

PK: As I planned well before beginning law school, I intend to move to China in January 2015 and begin my career as a foreign legal consultant.