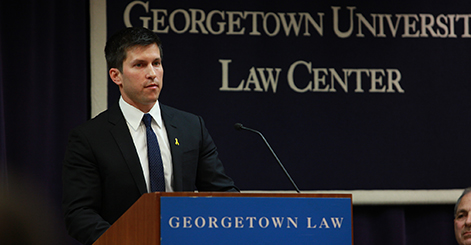 Brandon Stone received a standing ovation when he spoke at Georgetown Law’s 2013 Veterans Day Program, honoring those who have served in the military. Stone, a second-year student in the J.D. program at Georgetown Law, graduated with honors from the Ohio State University in 2004 and joined the U.S. Navy. Upon his commissioning at Officer Candidate School in Pensacola, Fla., he transferred to the Naval Special Warfare Center in Coronado, Calif., where he trained to become a SEAL officer. He later transferred to a SEAL Team in Virginia Beach, Va.

As a Navy SEAL, Stone served in a variety of leadership roles, including Troop Operations Officer, Assistant Platoon Commander and Platoon Commander. While leading others through a Taliban stronghold, he was severely wounded by an improvised explosive device, earning a Purple Heart along with a Bronze Star with valor for his heroism.

Still, he’s humble about his service. “I’ve had the good fortune to see what real service and sacrifice looks like,” Stone says. “I know that my contribution pales in comparison to that of many I know who accomplished marvelous feats and have given their lives in service of our country.”