When Pepperdine University’s School of Law needed a new dean in 2011, it found someone equal parts jurist and academic. Deanell Reece Tacha had served on the U.S. Court of Appeals for the Tenth Circuit since 1986 and as Chief Judge from 2001 through 2007. She was a member of the Judicial Conference of the United States and in 2006, Chief Justice John Roberts named her to the Conference’s Executive Committee.She has represented the U.S. judiciary internationally, too, traveling to Albania, for example, to help that nation develop a new constitution and government.

Tacha’s academic experience runs equally deep. A graduate of the University of Kansas with a J.D. from the University of Michigan Law School, she was a White House Fellow, a role that entailed serving as special assistant to the Labor Secretary from 1971-72. After a stint in private practice, she became director of the Douglas County Legal Aid Clinic in Lawrence, Kan., until 1977. During that time she joined the faculty at the University of Kansas School of Law, where she stayed for 11 years, through 1985. 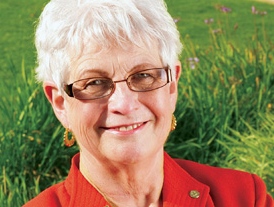 Amid a bevy of awards, several stand out: In 2007, Tacha received the Devitt Award, the highest honor given a federal judge for distinguished lifetime service. In 2008, she received the John Marshall Award for her positive effects on the judicial system. She was honored in 2012 by the American Inns of Court with the A. Sherman Christensen Award for her service to the organization and movement — recognition, in part, for her work on behalf of enhanced ethics, professionalism and civility in the legal profession.

LAWDRAGON: What drew you into legal academia?

DEANELL REECE TACHA: Mostly I came here from being on the federal court of appeals; I was there for 25 years, having been appointed by President Reagan. I was on the law school faculty for the University of Kansas, and then I was the vice chancellor for academic affairs there prior to the time that I was appointed to the bench. When I was an undergrad, however, I wouldn’t say I had academia in my sights – not at that point in my life. Although, I have always been interested in higher education and its importance to our society and to our future, to our children and to the economy.

As to how I came to be a dean, I really wasn’t searching for positions at all; I didn’t even have it on my radar screen. But several universities reached out to me when I reached the point where I could take senior status as a jurist. I initially kind of resisted, but then I began to think about the challenges confronting legal education. I think it’s fair to say that I saw the storm coming and thought it would be interesting and challenging and that, hopefully, I could make a little bit of a difference somewhere at the margins.

DRT: We are a Christian university, Church of Christ. As such, we really are invested in working on values-based and ethics-based legal education. We are very open to people of all faiths, and our faculty and student body is quite diverse. But underlying the law is that basic ethical construct, which at least in my way of thinking reflects a basic Christian values system.

Indeed, one of the issues I consider very important for the legal profession is that we all begin to understand that backdrop of why we have the rule of law at all. Although every law school attempts to do that, we openly and as a matter of emphasis are based on Christian values and ethics.

Another feature about Pepperdine, obviously, is that we have a great location. I’m looking out at the Pacific as we speak; that’s important. It’s probably also important to say – and I can say it because I spent most of my life in the Midwest – that there’s a lot going on here on the West Coast. It is so diverse and there are so many brilliant ideas popping around and creative people, I find it very energizing.

Admittedly, that doesn’t distinguish us from a whole ton of law schools out here.  This may, however: We intend to remain small. We will not get huge. We are very student-centered. We’re always ranked by Princeton Review as one of the most student-friendly law schools in the nation. And it’s true.

Given my experience with law schools, I would say, too, that though there’s a fair amount of competitive spirit here, it’s not palpable at all.  Recently, for example, a student’s computer broke down in the middle of an exam, and another student got another computer and, I think, loaned the person his own. The degree of mutual caring and support at this school is amazing.

LD: Are there programs or new initiatives aspiring law students should know about?

DRT: One is not new. It’s the Straus Institute on Dispute Resolution. There is no doubt in my mind that arbitration, negotiation and other forms of alternative dispute resolution will be very much a staple of contracting and corporate law in particular. It’s a growing program here.

We have the Palmer Center for Entrepreneurship and the Law, which stands at the junction between law and business and has tracks in real estate, media, sports, building business, venture capital, that sort of thing. That is a thriving program in which we partner with lots of law businesses and business businesses. It’s where some great new entrepreneurs are developing.

We also have the new Herbert and Elinor Nootbaar Institue on Law, Religion, and Ethics, which does a lot of global justice and public interest work and involves our students in various human rights and rule of law initiatives.

LD: What are your biggest challenges and how are you meeting them?

DRT: We are not greatly different from all the law schools in the country. The challenge is to continue to be places where very bright undergraduate students,  people from all walks of life, all parts of the economy can receive a quality legal education — and we need to keep it as affordable as we can.

For me right now, the greatest concern is continuing to attract young people into the legal profession, especially when you look at how many baby boomers will be retiring in the next few years, as one of our faculty members, Rob Anderson, has done. I am also convinced that a legal education is absolutely essential to both a flourishing economy and to our government.

You can look through history and see where the problem-solvers were; they were largely lawyers. They are legion, starting with Thomas Jefferson and Abraham Lincoln and going through to Sandra Day O’Connor and beyond. Great lawyers were on the forefront of moving us forward in solving disputes, resolving issues, focusing debate, modeling civil discourse. I can’t believe we aren’t going to need that well into the future. Trying to articulate that value of a legal education is the challenge and the duty of all of us in legal education, indeed in all of the legal profession.

DRT: Certainly intellectual property is popular. We are also seeing quite a trend toward mediation and arbitration. One of our fastest-growing programs is international commercial arbitration, and so we see a lot of people employed in that sort of alternative dispute resolution world. Another thing, for which I applaud this generation, is the amount of interest in public interest and government work. Government hasn’t been a huge employer here lately, but it will continue to be a place where a lot of lawyers are employed. For example, no matter what the fate of affordable health care, there will be a need for lawyers as regulations are developed and implemented and as things are sorted out. Another place where we see lots of students going is into compliance-related jobs in either corporations or financial institutions because of the continuing escalation of governmental compliance requirements.

It seems so remarkably shortsighted for people to say, “Oh, there’s not going to be a market for lawyers” when you look around at the landscape. That’s my view of the situation, but I am always the optimist.

Our students are going to nontraditional legal jobs as well, in part because they’re viewing legal services in whole new ways, and that’s exciting. For example, one of our very recent graduates sold a business – a law-related business – that he developed to a much larger corporation. So, here’s somebody who started his own business, did very well, and now will be starting something else.

I just completed a stint on the Legal Services Corp. task force on unmet legal needs. There are two giant chasms in this country: One is unmet legal needs and the other comprises lawyers who need jobs. We’ve got to find models that bridge those gaps, and I think our very bright new lawyers are going to find those.

LD: What do you do outside the classroom, when you’re not being dean?

DRT: In part, I commute to Kansas, because my husband and my home are there, and my children are all over the country. So just trying to keep up with my family – my children and grandchildren — and a whole host of national responsibilities: I think the fairest thing to say is I spend a lot of time in airports.

I’m also on several task forces both nationally and here in California. One is the task force in California that’s proposed – actually the state bar has adopted – a set of requirements for new lawyers that they do 50 credit hours of pro bono and 15 hours of experiential skills learning as a co-requisite with the bar exam. New York and California are the only ones that have adopted anything similar. I’ve been on that task force a couple of years. I’m on the ABA’s Rule of Law Initiative, which is international in scope. I’m involved with a group of women judges in merit selection for judges. And I’m on a task force to get more civic education in California so that we have informed voters.

There was a day when civics was a required course everywhere. Then as we got terribly concerned about math and science, a lot of the social sciences dropped out, and one thing that dropped out in a lot of places was civics. We’ve actually had some success here in California in re-inserting a civics requirement.