Legal education wasn’t Mark Brandon’s first career choice.  After obtaining his juris doctorate from the University of Alabama School of Law in 1978, he planned to work as a lawyer.

But five years later, in private practice in Birmingham, he taught a class at his alma mater as an adjunct. The experience kindled an interest in academia, which took Brandon to the University of Michigan, where he earned a master’s degree in political science, then to Princeton University for a doctorate in politics. 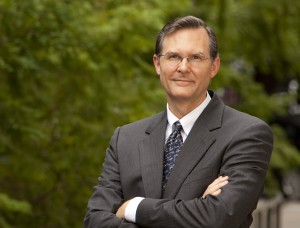 His two career paths merged in 2001, when Brandon became a law professor at Vanderbilt University. This summer they’re leading him back to UA’s law school as dean.

He takes over officially on July 1, succeeding William Brewbaker, who has held the post on an interim basis since last year.

“One, it’s home,” Brandon said. “Two, it’s a great law school. And three, I had in the back of my head that I’d be moving into administration and it turns out that both personally and professionally, it’s a good time to do that. So I’m really pleased to have the opportunity.”

Alabama Law has a student body of more than 460 as of last fall, and admits about 25 percent of applicants, according to Lawdragon data. Graduates taking the state bar exam for the first time have outperformed the Alabama average by 6 percentage points or more for the three most recent years in which data were available.

“The assumption when I was in law school and coming out of law school was, ‘Of course, you will have a job,’” Brandon said. “Now, not everybody comes out of law school with that. The larger legal market, the professional market of law, has contracted and it’s changed students’ sense of their horizons.”

LAWDRAGON: What are the most important skills lawyers need to succeed in today’s job market?

MARK BRANDON: The skills that students need coming out of law school today are in some ways not different from the skills that students have needed to come out of law school traditionally. They have to have a fine-grained conceptual understanding of what the basic elements of law are and how to walk around inside the various doctrinal categories of law, in all areas of law. So they need a basic conceptual education.

That’s always been true, and it continues to be true. The second thing that they need to give them a leg up in the marketplace is a kind of practical understanding of law, which you can do in a variety of ways. One of the things that Alabama is focused on, and people around the country are increasingly focused on, is the skills-based education through practical exercises within classes and with provision of courses that have as a primary — but not exclusive – component, the exposure of students to legal skills.

Alabama has recently adopted a course on the business of law. It’s a side of legal practice that in my day I was oblivious to, but I think it’s useful for students to be exposed to the business side of law so that it doesn’t come as a complete shock to them that law as a profession is not merely an intellectual or scholarly exercise, but also a business that requires some savvy.

LAWDRAGON: Are you seeing any kinds of trends in the jobs students are taking after graduating?

MARK BRANDON: Here’s what I’m seeing from my current perch: Over half of graduates at Alabama are still going to law firms. My bet would be that back in the day, back when I was in law school, that percentage would have been much higher, so there’s some adaptation that’s going on. A good number end up in business or industry, a solid 10 percent probably end up in government and about half of that, 5 percent roughly, in public interest.

This past year, I know from having seen some figures recently, Alabama ranks No. 7 in the nation in the percentage of students who are placed in federal judicial clerkships. That is an impressive ranking for Alabama. For our students, it’s nice that such a large percentage of the graduating students have that opportunity.

LD: You’ve mentioned that you wanted to focus on maintaining the affordable tuition offered at UA’s law school. How do you keep law school affordable?

MB: One way is to discount, with scholarships that incoming students can use as hedges against the cost of law school and against tuition. The second way is just to keep tuition as low as we can, responsibly, while wanting to keep enough revenue to maintain a quality institution.

University of Alabama’s law school has the advantage of being in a university that’s extremely supportive. The university has understood the need in this marketplace to provide a legal education that’s within the reach of students and so it’s helped us keep tuition at, I think it’s fair to say, not just a reasonable level, but at an impressively low level, given the quality of the institution. I think the result is that Alabama is not only one of the very best public law schools in the country, but it’s also the best value in legal education today anywhere.

MB:  What I do now is teach and write, and what I will be doing is focusing on internal administration and alumni relations, relations with the bar and raising money. I will be interested in, as an administrator, the same things that I have been interested in, which is really the quality of life that happens in the law school, but the nature of my contribution is going to be pretty different.

The key to doing everything that a law school wants to do is money. Every dean has at the very top of her or his job requirements the raising of revenue, and that is one of the biggest challenges that any dean faces and certainly one that I expect to face. But it’s part of the world we live in, that to do the things we want to do, we have to have the resources to do them.

LD: Will you still be teaching?

LD: What do you do in your spare time?