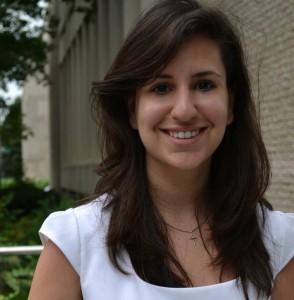 Anyone describing Alejandra C. Salinas, a 3L at Boston College Law School, better get used to using the word “first.” Salinas was the first Hispanic president of College Democrats of America, the youth arm of the Democratic Party. She then marked her tenure with membership growth, record-setting convention attendance and increased investments in state organizations.

As a superdelegate in 2012, she became College Democrats’ first leader to speak at a Democratic National Convention; her speech was broadcast nationally, another first. She may be the first to come out to family and friends on national television as an “LGBT Latina.”

Salinas launched herself into her first vanguard role in 2006 around a surprising issue in her border hometown of Laredo, Texas. The battle over illegal immigration was at its height. “But no one in Laredo was talking about it, even though it affected the entire community,” Salinas said in a telephone interview.

She continued: “My immediate thought was here am I, taught by my parents and older relatives to be proud of who I am and where I came from, and yet my peers on the other side of the Rio Grande were going to become marginalized for that same heritage.”

“It was wrong, and I knew that I had to do something about it,” she said.

The fact that her father had taught all three of his daughters to be fearless and to know that they could do anything they set their minds to, she said, strengthened her resolve.

What she did was organize the first protest walkout at her predominantly Hispanic high school. Through a series of confrontations with school administrators, and with the support of local media that recognized the importance of young people speaking up about issues of moment, Salinas helped create “opportunities for dialogue.” The planned walkout was canceled, replaced by open discussion forums in a community that, she said, “proved to be incredibly receptive.”

Salinas ended her term in office at College Democrats when she became a 1L at BC Law. Nowadays she’s once again a DNC superdelegate and on the DNC Rules Committee prepared to add another “first” or two to the notches on her crowded belt.

LAWDRAGON: What were the key factors you used to choose your law school?

ALEJANDRA C. SALINAS: A law school’s reputation, culture and the opportunity to attend a Jesuit institution figured strongly in my law school search and decision-making. When I first visited Boston College Law, I was incredibly impressed by the faculty and the unique feel of the student body.

I’ve said it before, but it’s worth repeating for would-be law students – at BC Law, there isn’t the cutthroat competition that you can find at so many high-quality law schools. Students here actually try hard to help each other; they work to make the law school experience a beneficial one for themselves and for their classmates. I came here with certain expectations of what my experience would be, and I’m glad to say that this school hasn’t disappointed me.

ACS: I wish I had understood the value of a school’s geographic proximity and reputation in a strong legal market when it comes to the job-search process. Law firms and public interest organizations often turn to law schools in their own backyard when recruiting. This not only gives employers a better opportunity to reach students, but also gives students an opportunity to develop a greater understanding of their prospective employers.

While I didn’t consider this beforehand, I am fortunate to attend an institution like BC Law that surely benefits from being in Boston and proximate enough to New York.

ACS: There have been countless enriching experiences during my time at BC Law, but my current enrollment in the Ninth Circuit Appellate Project Clinic has truly stood out as exceptional. This clinic, led by a phenomenal new professor named Kari Hong, gives four students the opportunity to prepare briefs and argue immigration cases brought by indigent clients who would otherwise be without counsel before the Ninth Circuit.

Many lawyers can go their entire career without ever going before a federal appellate court. The ability to do so as a law student is an opportunity that goes beyond anything I could have imagined when I began.

ACS: I’m looking forward to returning to WilmerHale as an associate in Boston and hope to gain experience in intellectual property litigation. I was initially reluctant to join a law firm when I began my job search. My summer experience at WilmerHale exemplified the fact that a practice in cutting-edge commercial litigation can also include a rich pro bono experience.