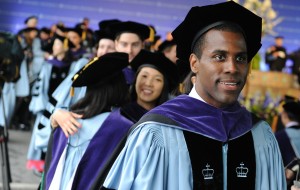 Columbia University law school awarded more than 400 juris doctorate degrees at its May 2014 commencement ceremony, above. The size of first-year classes at law schools across the U.S. has dropped for three straight years and may reach a fifth straight decline, based on the number of LSAT takers in June.

Declines in U.S. law school enrollment are poised to stretch into a fifth straight year after the number of people taking the Law School Admissions Test, a gauge of applicant interest, dropped during the first 2014-15 session.

The exam is given four times each academic year, starting in June, and the 21,802 test-takers last month were the fewest for that period since 2000-01, according to data from the nonprofit Law School Admission Council, which administers the test. LSAT results are used by all of the 200-plus American Bar Association-accredited law schools in determining whom they admit.

The 9.1 percent drop, which would be an indicator for the 2015-16 academic year, follows three straight years of sliding law school enrollment as a saturated job market left many newly minted lawyers struggling to find employment and repay debt of more than $100,000.

Such decreases have prompted institutions including the University of Baltimore law school in Maryland to reduce class sizes in order to adhere to academic benchmarks for admission.

“It’s important to make sure that you’re maintaining standards and admitting students who are going to succeed, and you’ve got to take account of the legal marketplace,” Ron Weich, the dean of Baltimore Law, said in an interview earlier this month. “I really think it’s the responsible path to shrink the school in reaction to the market forces.”

The number of test-takers doesn’t correlate directly with the number of law-school applicants, since many applicants take the test more than once and some who take it don’t actually submit an application.

Further, the decrease in LSATs given in June may not be reflective of the entire year, noted Wendy Margolis, a spokeswoman for the Admission Council. Three more sittings remain, and the two in October and December typically draw the most students, she said.

Altogether, about 53,100 students have applied for law school this fall through July 4, down 7.4 percent from a year ago, according to the council. That represents an estimated 97 percent of total applicants for the 2014-15 academic year.

While final admissions figures aren’t yet available, enrollment of first-year law students dropped to 39,675 in the fall of 2013, down 24 percent from its peak in the fall of 2010. It was the third straight decline.

The June LSAT data suggests that any turnaround in that pattern isn’t yet under way, said Susan Westerberg Prager, dean of Southwestern Law School in Los Angeles and former chief executive officer of the American Association of Law Schools. Dan Rodriguez, the association’s president, was unavailable for comment last week.

The enrollment trend reflects both a gap between growth in lawyer jobs and growth in the number of graduates and concern that the broader economy will hinder future employment and income.

Law school deans and recent graduates have said the law remains a strong career option, but the cost of a degree, which averaged about $171,000 in 2013-14, and the tight labor market make it imperative for students to consider their choices carefully. Finding the school that offers the best value and realistically assessing earning potential after graduation are vital, they said, since the latter determines ability to repay debt and maintain a comfortable lifestyle.

Many of the students choosing to pursue a law degree today “are more appreciative of the fact that it’s a big, tough world out there and they know that they’re going to have to do their best to find their first place in it professionally,” said Prager, who was named dean of Southwestern in 2013. “They have a kind of determination and grit, and there are more people like that than was perhaps historically true when jobs were easy to come by.”

To the extent that declining law school enrollment is linked to “uncertainty and declining optimism about our economy, we have to ask the question, ‘What will someone do rather than go to law school?’” Prager noted. “I don’t think that question is being addressed very much. Are we going to see, 20 years down the road, larger numbers of returning students because there’s a generation that didn’t pursue a dream they had because they were worried about whether it was an economically wise decision?”