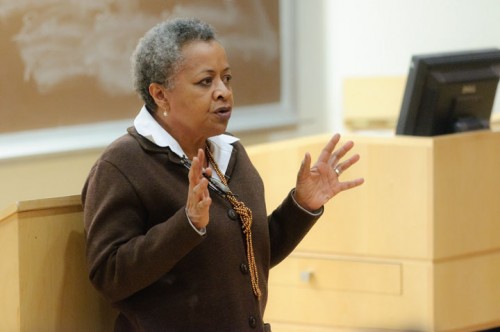 It seems fitting that a lawyer who litigated for the future of civil rights in the U.S. should now be working to remedy civil rights injustices of the past.

“I love law – its complexity, its importance in human life and experience,” said Margaret A. Burnham, a professor at Northeastern University School of Law. “I believe that law students need to develop that sense or else change professions.”

Burnham is the founder and director of the law school’s Civil Rights and Restorative Justice Project, which engages students in investigating every racial killing in the Jim Crow South from 1930 through 1970. The goal is to work with victims’ families and communities to bring these cases to a just close. “We want to draw current meaning from this legacy of racial violence, which often involved local officials and the police,” Burnham said in e-mails and a telephone interview.

Burnham herself led a team of law students and outside counsel in 2008 as they prosecuted a federal lawsuit in the case of Henry Dee and Charles Eddie Moore. Representing the victims’ families, the Northeastern Law team maintained that Franklin County, Mississippi, law enforcement officials assisted the White Knights of the Ku Klux Klan in the kidnapping, torture and murder of the 19-year-olds.

The case was settled in 2010, the first time that victims of the Klan’s race-based violence recovered damages against a public entity for its role in Klan activities.

“Our program stands somewhere between a live-client clinic and a policy clinic,” Burnham said.  “Students work closely with individuals and communities on these homicides, and they also help develop restorative justice programs in each case.”

A graduate of Tougaloo College in Mississippi with a juris doctorate from the University of Pennsylvania Law School, Burnham began her civil rights career at the NAACP Legal Defense and Educational Fund. She joined the Boston Municipal Court as an associate justice in 1977, becoming the first black woman to serve in the Massachusetts judiciary. Burnham became a partner in a Boston civil rights firm in 1982, adding international human rights to her practice. Nelson Mandela, then president of South Africa, appointed her to a 1993 commission investigating alleged human rights violations within the African National Congress.

Burnham is a former fellow of the Newhouse Center for the Humanities at Wellesley College and of the Bunting Institute at Radcliffe College. “My work these days deals with the different initiatives being used to rectify past racial injustices,” Burnham said, “and with encouraging students to think deeply about both the people and issues at the heart of restorative justice.”

LAWDRAGON: Why did you decided to go to law school?

MARGARET A. BURNHAM: In the 1960s, I started working with the Student Nonviolent Coordinating Committee in Mississippi. That part of the Civil Rights era, 1964 to 1966, was a transformative period for me. I was alone, away from home and confronting dangerous situations that often found me and others working for voting rights and more dependent on lawyers to both help protect us and achieve our goals. I realized that while I knew a lot about civil rights, I needed to know a lot more and be trained to pursue civil rights advocacy.

LD: What factored into your choice of law school?

MAB: During that same period many law schools were taking a hard look inward and were committing to more diversity in their entering classes. A number of law schools came recruiting at my undergraduate institution, which was historically black, Tougaloo College in Mississippi, where I was earning a degree in American history. The University of Pennsylvania Law School was one of them.

Quite apart from being recruited, I found Penn Law very appealing since it had strong scholars in criminal defense and poverty law, which were my obvious areas of interest. It was one of the first schools to feature clinics in those two fields, and I had an opportunity to work with Professor Anthony Amsterdam, who taught criminal law, and with Professor Howard Lesnick, an expert in labor law.

Law school wasn’t an easy experience for me, however. There were only 12 women and 3 African American students enrolled. That added “not feeling that you belong” to the normal stresses inherent in law school generally – digging in, learning to read a new language, to read fast and to always compete. I certainly felt that I was in a completely foreign environment. And I think that sense of alienation of “what am I doing here” affects your ability to do your best work. I’m very aware of that when I’m teaching.

LD: You were so committed to civil rights lawyering. What drew you to academia?

MAB: I came to academia from a civil rights litigation practice. My first job out of law school was staff counsel at the NAACP Legal Defense  and Educational Fund. Later I worked as a public defender and a partner in a civil rights and criminal practice. Civil rights advocacy requires a multi-pronged approach, and I had concluded that the environment for effective litigation was deteriorating. As I saw it, the U.S. Supreme Court was closing the litigation window; it was putting procedural barriers in the way of access to the federal courts that had been protected by the 14th Amendment. Claimants’ rights were becoming defendants’ rights, so the courts weren’t accomplishing what they had during the 1950s and 60s.

Also, some people can be litigators for a lifetime. For me, there was a point at which I had to do something different. I needed to apply my judgment, my accumulated knowledge and work with future lawyers. I wanted to help them think about their values and professional ambitions in a rapidly changing legal environment.

So I turned to research, policy and teaching, joining the political science department at the Massachusetts Institute of Technology in the 1990s, before coming to Northeastern University School of Law.

LD: Why did you then create the Civil Rights and Restorative Justice Program?

MAB: Let me start with the when and what we created, and you’ll understand why. The program was launched in 2007, right after President Bush signed the Emmett Till Civil Rights-Era Crimes Act. In those early years our mission was to explore the specifics of racially biased criminal law enforcement during the Civil Rights Era and to work with communities affected by these wrongs. The Emmett Till Act empowered the Justice Department to launch investigations into cold cases from that period – all of them racial killings – and to assist state and local law enforcement agencies in the prosecution of these cases.

I represented, for example, the families of the victims of a 1964 Ku Klux Klan lynching in a successful civil action against a Mississippi county. The theory of the case was that the county’s sheriff could have but did not prevent the lynching. In pursuing these and similar cases, we quickly realized that there were hundreds of racial homicides, many involving police officers, from the 1940s and 1950s that had not been examined by legal scholars. So we turned our attention to those years.

Our current goal is to investigate every racial killing in the Jim Crow South from 1930 to 1970. Why that period? First, there is a rich database from 1884 to 1930 – homicides, mostly racial lynching – thanks to sociologists who documented them.

After 1970, you have good, reliable reporting of race-based homicides. You don’t have to look deeply into the files to find them. Also the Emmett Till Act basically covers to 1968, which would comprise the 1957 Montgomery to Memphis march through the murder of Dr. Martin Luther King Jr. in 1968. All of this leaves those in between years – 1930 through 1970 – fair game for investigation. It’s like a time warp. Literally nothing has been done.

Which leads me to the why the program was started: No one has gone around to these victims’ relatives and said, “Tell me your half of the stories and let us find the rest.” The rest, you see, is buried in government documents. It’s enormously satisfying – in ways, I believe, no one quite expected – for families to find out what the government was doing regarding the death of loved ones. FBI records are open now; government records are open. If you know where to look, and if you figure out what to do with what you find, you can complete these stories and make them widely known and read.

For all that it’s a great way to train law students to be lawyers – they harness their own investigative skills, talk to witnesses, decide when to use experts, differentiate between verifiable truth as part of an experiential truth – it’s a very important reminder that the law affects human beings. Students in our clinic investigate cases that we find in contemporary media accounts. They trace the legal proceeding, conduct investigations at the scene of the crime and determine whether there are legal remedies.

Our work is a form of legal archeology: recovering documents lost to history, examining each case to lift up its fault lines and engaging in memory work with the affected communities: collecting their photographs and yellowed news clippings. In the end, we explain to real people why the legal process failed them.

LD: What distinguishes your program from others?

MAB: As far as I know, ours is the only law clinic investigating killings from this period and joining the investigative work with restorative justice, although there is another law clinic working in the 1960s and at least two journalism school clinics in the same period.

Our clinic stands somewhere between a live client clinic and a policy clinic, for the students work closely with individuals and communities on these homicides and, as I said, they also help develop restorative justice programs in each case.

LD: In this and your other work at Northeastern, what are your challenges as an educator and faculty member?

MAB: Students introduced to an old case through a news article do not know whether there will be a rich trail to follow or a dead end. This process introduces them to the realities of law practice, where the practitioner’s real skill is in influencing results in a situation over which she does not have full control. And we ask a lot of our students. They must develop practice skills to manage their cases; subject-matter knowledge to understand the criminal procedures and fluency in American racial history and international human rights principles to handle the restorative justice aspect of the work. My challenge every day is to guide each student in succeeding.

There is another, personal challenge: Double-checking myself as to whether and why this matters. Why is what happened all those years ago still important? I can never allow this to become an exercise in self-indulgence, my own flirtation with history. We’re not simply being clever here; we’re creating something of lasting value – at least, that’s what I must ensure.

LD: Are you seeing any trends in your particular area of expertise?

MAB: Our work is part of a global shift to democratize and disseminate memories of governmental harms. Across the globe, programs like ours are engaging citizens in coming to terms with the past, combating collective amnesia, discovering the continuities across time and putting in context the ongoing debates about law enforcement practices and minority-group subordination today. This work is creating new perspectives on governmental responsibility for past harms, and those of us in the field are engaged in this norm creation, spreading and enforcement as we uncover this buried history and help our publics understanding what it means.

LD: What do you do outside school when you’re not teaching and working with the clinic?

MAB: I spend a lot of time in the South visiting friends and listening to live music. I like it all: jazz, folk, rap, R&B and classical. And I’m a sucker for a good male crooner. Oh, to be 30 years younger . . .