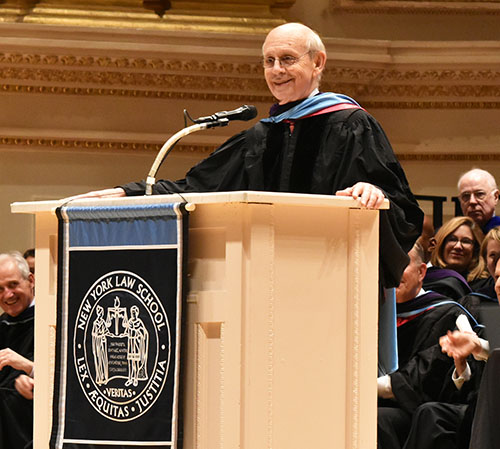 The diversity of the legal profession’s next generation was on full display at the 2018 graduation ceremony for New York Law School, held at Carnegie Hall on June 1. In his opening remarks, Dean Anthony Crowell said that nearly 60 percent of the 2018 class were women and that the law school “was part of the solution” at a time when so many were testifying to assault, harassment and discrimination.

The student speakers who warmed up the crowd for U.S. Supreme Court Associate Justice Stephen Breyer also reflected the wide range of backgrounds and life experiences that compose the student body. Among them was Sara Moharrem, an associate at Goldman Sachs who studied in the evening program and gave the day’s most emotional speech.

She praised her parents, Egyptian immigrants who never believed in a limited role for women. Moharrem’s father and other family members were in the audience but her mother died four months ago. Moharrem had earlier decided not to attend the event but eventually changed her mind, concluding her mom “thought we deserved to be celebrated for our achievements.”

“I hope I have made my mom in heaven proud,” Moharrem said. “I miss you mommy, and everything I do is for you.”

The crowd gave her a standing ovation.

The other overriding sentiment of the ceremony was a stark concern for the rule-of-law in the current political environment. Crowell told the students that they could not pass the bar exam fast enough.

“You will begin your legal careers in quite an unsettled world that needs your leadership, your engagement and your steadfast commitment,” the dean said.

In his keynote address, Justice Breyer discussed Albert Camus’ book “The Plague” as an allegory for lingering fascist sentiments that always have the potential to fester and multiply.

The rule of law, Breyer said, is “one instrument to fight against the plague germ.”

A member of the Supreme Court’s liberal block who is known for looking to the laws of other countries for guidance, Breyer urged the graduates to “find the time to participate in public life.” Otherwise, he said, American democracy “will not work.”

He suggested that the audience watch on YouTube the speech that Robert F. Kennedy gave on April 4, 1968, shortly after Martin Luther King Jr. was assassinated, in which the presidential candidate urged listeners to fight hatred with love and compassion.

Elsewhere, however, Breyer tried to strike a cheerful cord and said that one good piece of advice is simple: to “lighten up.”

“You have earned a happy day,” Breyer said.

The ceremony marked New York Law School’s 126th commencement. Among the students, faculty and alumni honored was Christina Storm, a 1977 graduate and Lawdragon 500 member who founded Lawyers Without Borders to promote rule of law globally.

Moharrem and Dean Crowell spoke lovingly of Martin Banks, 59, a member of the class of 2018 who passed away three months earlier. Banks’ sister joined Crowell on stage to accept his degree, as the crowed rose to its feet again.

“As I think you can tell, Martin made an incredible and remarkable impression on our entire community,” an emotional Crowell said. He added that Banks would want his classmates “to be encouraged.”

“Though we will miss him dearly, we will carry on his wisdom, and his kindness, and his gratitude, for the years to come,” Crowell said.