Altogether, 37,924 students began working toward juris doctorate degrees at the 204 institutions accredited by the American Bar Association’s Section of Legal Education and Admissions to the Bar, the government-designated regulator for law schools. That marked a 4.4 percent drop from the previous year — the smallest since numbers began falling — and a 28 percent slide since the historic high of 52,488 in 2010, according to an ABA statement and archived data. 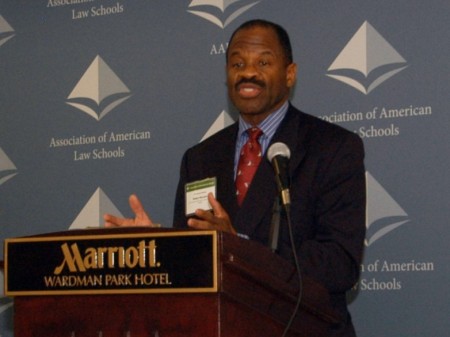 Blake Morant, 2015 president of the Association of American Law Schools, speaks during the annual conferencein Washington. Law schools are responding to the evolution of legal education in a variety of ways, Morant said.

The data offered glimmers of hope to law schools that have grappled with waning interest as an oversaturated job market after the 2008 financial crisis left many graduates scrambling to find jobs and repay student-loan debt of $100,000 or more. Many schools have responded by increasing practical-education courses, boosting financial aid packages and helping graduates look for jobs outside the traditional hiring seasons for law firms.

“American legal education is evolving,” Blake D. Morant, 2015 president of the Association of American Law Schools and dean of The George Washington University Law School, said in a media briefing at the organization’s annual conference in Washington, D.C. “It has evolved from the beginning of this country, and it is continuing to evolve. The catalyst for the acceleration of that evolution has been the downturn since 2008. Law schools all over the country are responding to that evolution in a variety of different ways.”

Boston University School of Law, for instance, created an associate dean’s position to oversee its clinical and externship programs, which involve more than 250 students a year.

Harvard Law introduced a Public Service Venture Fund that awards grants to graduates founding startups that target unmet legal needs, helping compensate for the shortage of other grant sources caused by the recession and the slower economic growth that followed.

In Minnesota, William Mitchell College of Law introduced a hybrid program this semester that lets some students split their time between on-campus and online courses and earn a law degree without relocating.

That school’s dean, Eric Janus, attributed the smaller decline in nationwide enrollment this year to a combination of factors.

“The word is getting out to prospective students that there are great scholarships and financial assistance packages to be had,” he said in a telephone interview. “The cohorts that are going to be graduating in three to five years are going to be graduating into a world with a much diminished supply of lawyers, and there’s been some evidence that the openings for lawyers are not as low as people might have thought, given the baby-boomer retirements and so forth.”

A flood of data showing a mismatch between investment in a legal career and financial return, particularly in the short term, may have been absorbed by the market, Janus said.

“Now, we’re having people being more careful about price, but they’re not getting more and more scared,” he said. “These are people who are serious about becoming lawyers.”

The shrinking decline may be partly the result of positive economic indicators. Job growth in 2014 averaged 246,000 positions a month, compared with 194,000 the year before, federal Bureau of Labor Statistics Commissioner Erica Groshan reported this month. 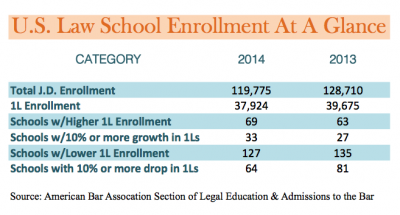 The jobless rate at year-end was 5.6 percent, the lowest since 2007, and Groshan said almost half the decline was among long-term unemployed.

Enrollment numbers across the board were bolstered by growth in the first-year class at 69 law schools as well as the provisional accreditation of another law school since the previous year’s figures were compiled. That school, at Lincoln Memorial University in Knoxville, Tennessee, reported first-year enrollment of 25 students.

Total JD enrollment, meanwhile, dropped 6.9 percent compared with the previous year’s decline of 7.4 percent. Still, total enrollment of 119,775 was the lowest since 1987, when the U.S. had 175 ABA-approved law schools, and amounted to an 18 percent drop from the 2010 high, the ABA said.

That reflects declines in first-year enrollment at almost two-thirds of U.S. law schools, the ABA said. The numbers at 64 law schools dropped by more than 10 percent, and enrollment at 25 schools fell more than 20 percent, fueling discussions at the law school association’s annual conference and prompting its theme of “Legal Education at the Crossroads.”

“The urgency and the anxiety level is driven by the predicament our law schools are facing: declining enrollments, high cost and high level of student debt, challenges to employment opportunities and a great amount of negative publicity about law schools,” Dan Rodriguez, the dean of Northwestern University School of Law and the 2014 president of the law school association, said in an interview published in the conference newsletter.

“This is a world we have never been in before,” he said. “This has generated more pressure on us, which I think we should embrace in the sense that we have the chance to move in some important new directions.”