George Zhang enrolled at Columbia Law School thinking he could help solve some of society’s most difficult problems. Three years later, he realizes just how ambitious that was.

“I know how difficult it is to write a paper that gets cited, or read for that matter, by anyone, much less to influence the broader debate,” Zhang, the 2013-14 president of the Student Senate, told his almost 800 fellow graduates in a commencement ceremony at the school’s Morningside Heights campus. But that difficulty shouldn’t stop them from trying, he said. 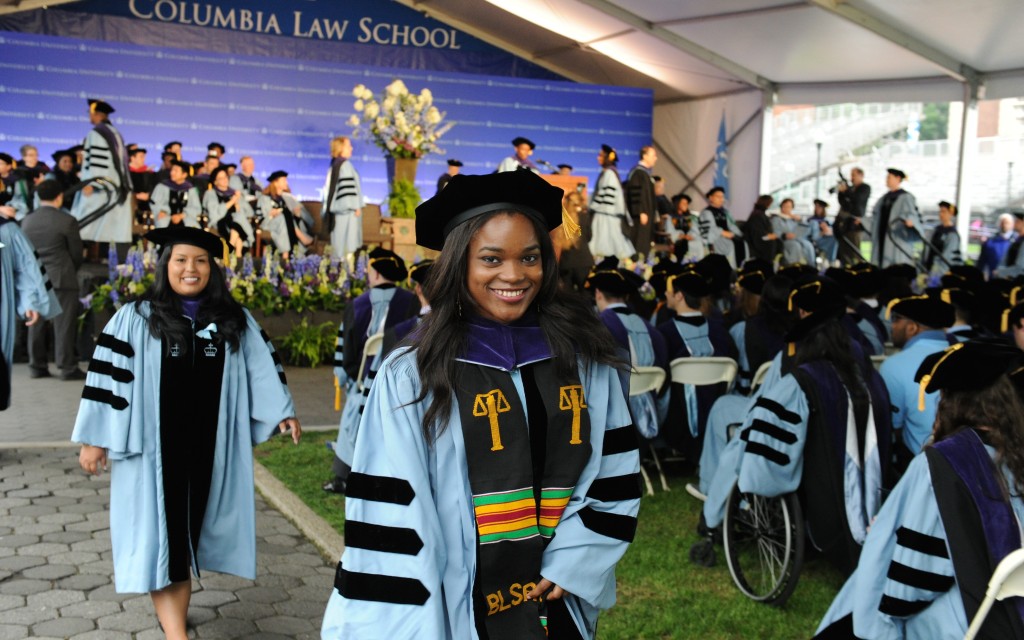 Almost 800 graduates received degrees at Columbia Law on Thursday. Speaker Roberta Kaplan, who successfully fought the Defense of Marriage Act, urged them to fight cynicism by taking the “right cases.”

Schizer is returning to teaching after 10  years as dean and will be succeeded by Gillian Lester, acting dean of the University of California-Berkeley law school.

One of the nation’s premier law schools, Columbia charges tuition of about $57,000 a year and boasted first-time bar-passage rates in New York of 95 percent or higher in the three years through 2012, according to Lawdragon data. More than 70 percent of its graduates land jobs at large law firms, which typically pay the highest salaries.

Like Zhang, many of the speakers urged the graduates to use the advantages of their education to fight for equal rights, especially for people whose limited incomes and education leave them unable to fight for themselves, and correct systemic problems.

Remaining optimistic is challenging in a society grappling with challenges from fossil-fuel pollution to human rights violations and rampant income inequality, Zhang said, but working to make a difference is worthwhile nonetheless.

An immigrant whose family came to the U.S. from northeastern China when he was 8 years old, Zhang took his own advice to heart while at Columbia. As Student Senate president, he helped organize a series of focus groups with law school administrators to discuss which programs and policies worked well and which needed improvement, according to a statement on the law school’s website. One of those talks prompted an increase in computing capacity for course registration, making it faster and more efficient, according to the statement.

“For every problem that chips away at our optimism, there are better reasons to stay more optimistic,” Zhang said. “We have the entire history of human innovation to bolster our outlook. For all these reasons and more, I’m very optimistic that our class will make a very positive impact. We will reform the tax code. We will fight to protect human rights around the world. We will run more accountable governments and corporations, and the connections, skills and confidence that we gained in our time here at this renowned institution will help us greatly in these endeavors.” 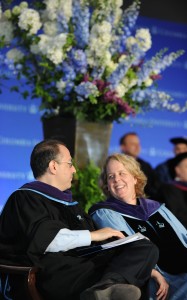 No one really knows what’s possible until they try, or what life has in store for them, said Kaplan, who argued U.S. v. Windsor before the Supreme Court, leading to its decision against the federal law that had allowed states to refuse to recognize same-sex marriages granted outside their borders.

“As a closeted college student at Harvard in the mid-1980s, or as a slightly less closeted law student here at Columbia in the late 1980s,” she said, “if you had told me that one day, as an out litigation partner at Paul Weiss, I would marry a woman, have a child and then be standing here at my alma mater, having won a landmark civil rights case before the U.S. Supreme Court, I would have told you that you were certifiably insane.”

That landmark case originated with Edith Windsor, a New York City resident in her 80s who sought to take advantage of a tax exemption for surviving spouses when her wife, Thea Spyer, died in 2009 and left everything to Windsor. Since the Defense of Marriage Act excluded same-sex partners from the federal definition of “spouse,” Windsor had to pay the taxes, but she filed suit, claiming the provision was unconstitutional.

In a world informed by Fox News, MSNBC and Twitter, it’s easy to become cynical and assume that cases are decided not on their merits but for less-principled reasons, Kaplan said.

“I’d like to offer U.S. v. Windsor as a kind of antidote to that kind of cynicism,” she said. “Take on clients and cases because you know in your mind and in your heart that it’s the right thing to do. As far as I can tell, that is what this crazy condition of being both a human being and a lawyer is all about.”