Campus Snapshot: We can say this about Western Sierra Law School: It has an address. It does not have a correct address in the office park where it sits adjacent to a run-down airstrip, sharing space with credit collectors, but it does have an address. Also, it is roughly 300 miles South of the Southern end of the Western Sierra, for those geographically inclined.

One of the most interesting aspects of the Law School Road Trip is the 5th Circle of Hell that the state of California allows in the form of state and unaccredited law schools. (Lawdragon Campus completely supports all forms of legal education and any efforts to diversify the profession and bring more lawyers to low- and middle-income people. But the divergence in quality among these state-allowed schools is truly shocking.) 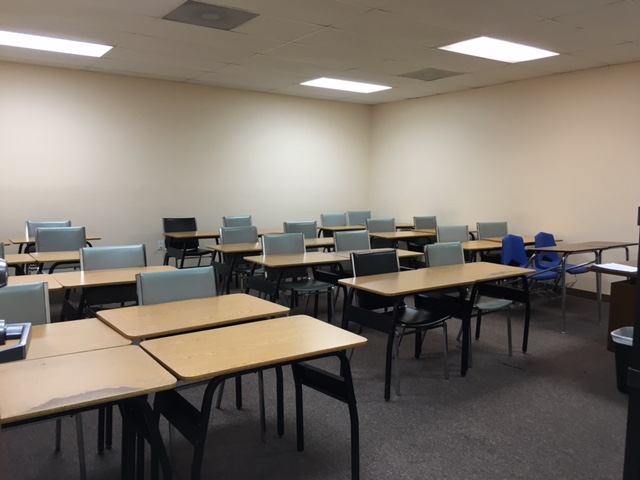 As part of our San Diego road tripping, we drove to an air strip and office park, where we wandered around and found a sign for Western Sierra Law School, which is registered with the Committee of Bar Examiners of the State Bar of California. So any students it may or may not have must pass California’s Baby Bar to earn the right to take the real bar. The school’s site claims that 61 percent of its students pass the Baby Bar, and that 50 percent of those that take the State Bar pass it.

But we’re still not sure it has students. So, we find a helpful Fed Ex delivery person who tells us they moved to a new suite. Hooray, we think, things must be going splendidly; maybe they expanded? Like dutiful mice on the trail of cheese, we continued on and found the school of no one’s dreams.

We wandered in, took a dozen photos of empty classrooms and the framed pictures of graduates hanging on the wall. There was a bowl of candy, which was short one tootsie roll when we left.

The school bills itself as an alternative to traditional legal education, and that is certainly accurate. It appears to have no students, no staff and no dean. And, to be fair, we visited during the day and Western Sierra is a night school geared for students with full-time jobs. But we’ve visited plenty of other night law schools where we at least found signs of life during the day.

Other troubling signs: Western Sierra’s own website merely has blind ‘dean’ or ‘dean of students’ addresses as contacts. And as for the nine ‘faculty’ listed on its website, more good news: only one has been suspended for failure to provide legal services competently; another is inactive; and two more are not members of the California bar. That leaves five listed faculty who are members of the bar in good standing, two of whom seem to work for the San Diego City Attorney’s Office.

While you’re not required to be a member of the bar to teach law in California, perhaps you should not have been suspended for being incompetent. And that’s the least of Western Sierra’s issues.