If you ever considered becoming a lawyer, you’re acquainted with the LSAT, the entrance exam used by most U.S. law schools in deciding which applicants they accept.

You may be less familiar with the Law School Admission Council, the Newtown, Pa.-based group that administers more than 150,000 of the tests a year at a charge of $170 each.

The organization is waiting for a federal judge’s approval of its tentative $7.73 million settlement with the U.S. government this month in a case accusing the test-giver of discriminating against students with disabilities. The lawsuit, filed in April 2012 in the Northern District of California, said the Admission Council created burdensome documentation requirements for students requesting special accommodations for disabilities such as vision problems or attention-deficit disorder, then capriciously denied some requests anyway.

The suit also claimed the group’s practice of “flagging” the scores of students who were granted extra time to complete the test because of their disabilities was discriminatory. Student scores aren’t flagged for the SAT college entrance exam or Graduate Record Examinations, both of which are administered by the nonprofit Educational Testing Service.

In addition to the monetary settlement, the Admission Council agreed to streamline its evaluation of requests by automatically granting most of the accommodations test-takers can show they’ve received for other standardized exams like the SAT; implement other “best practices” for considering such requests based on recommendations from a panel of experts, and stop flagging scores of test-takers granted extended time to finish. 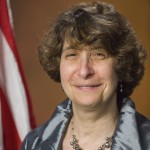 If U.S. District Judge Edward Chen approves the settlement, she said, it “will impact tens of thousands of Americans with disabilities, opening doors to higher education that have been unjustly closed to them for far too long.”

The disability settlement isn’t the Admission Council’s first with  the Justice Department. The organization agreed to pay $20,000 to the government in 2002 to settle claims that it requested unreasonable documentation from people with physical disabilities and failed to provide accommodations required under the Americans With Disabilities Act.

That agreement didn’t cover handling of applicants with learning or psychological disabilities. The Admission Council, which didn’t admit any liability in the 2002 settlement or the current proposal, said the Justice Department had been aware that it flagged test scores since at least 1986 and, indeed, helped craft the wording used to notify test-takers of the practice.

The request forms given to people seeking special accommodations were negotiated with the Justice Department in 2002, council spokeswoman Wendy Margolis said in an e-mailed statement.

“We decided to resolve this case not because we believe that we were wrong in our position, but because we do not think that continued litigation is in the best interests of our member schools or prospective law school students,” she said.

The flagging of scores will be stopped once the settlement is approved even though “professional testing standards support” such a system, she said.

“It would have taken many years to conclude this litigation, with enormous expense and disruption for LSAC and significant uncertainty for schools and applicants,” Margolis said. “Our first priority is to test takers and to the member schools that rely on test results when making admission choices.”

Those schools include all of the 200-plus institutions accredited by the American Bar Association, from the University of Southern California-Gould on the West Coast to New York’s Columbia Law, which held its 2014 graduation ceremonies last week.

PROFESSOR OF THE YEAR

Among the graduates was Miguel Gradilla, who hasn’t forgotten his fear of being called on in Professor Gillian Metzger’s constitutional law class during his first year. He often looked up words online to follow what she was saying.

“I remember being immediately struck by her fierce intellect, challenging us, whether intentionally or not, to get on her level,” Gradilla said last week as the Class of 2014 presented Metzger with the Willis L.M. Reese Prize for Excellence in Teaching. 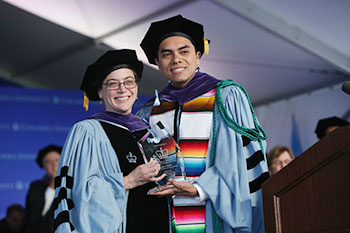 “Under her tutelage and with her unflagging support, I grew from a 1L with a vague understanding of public law into a graduate armed with a confident grasp of it, chomping at the bit to make my mark,” said Gradilla, who earned a juris doctorate after what he called an “unlikely path” to Columbia Law.

His parents, he said, came to the U.S. from Mexico with little more than elementary school educations, a strong work ethic and their dreams.

“My family’s experience provides me with perspective, is a source of deep pride, and helped lead me to this day,” he said. “However, I would not be fulfilling a lifelong dream today but for the many people in my life who have pushed me to fulfill my potential and grow into the person I am meant to become. At Columbia, Professor Metzger has been one of those people.”

Metzger, herself a 1996 graduate of Columbia law, is the vice dean for intellectual life and faculty director of the Center for Constitutional Governance. In addition to constitutional law, she teaches courses in public law, administrative law and the federal courts.

During the past year, she started a movie series in which professors and students discuss the cultural and legal issues raised on screen.

Columbia, one of the nation’s premier law schools, was founded in 1858. It charges tuition of about $57,000 a year and its alumni earned first-time bar-passage rates in New York of 95 percent or higher in the three most recent years for which figures are available, according to data compiled by Lawdragon.

The role of the newly minted lawyers who earned degrees from Columbia last week will be not only to predict legal consequences on behalf of clients but to help mold the law moving forward, Metzger said in a graduation address.

Even Oliver Wendell Holmes, a U.S. Supreme Court justice in the early 20th century and a noted skeptic, “insisted that the law was not static and urged its improvement as a pressing task,” said Metzger, who herself clerked for Supreme Court Justice Ruth Bader Ginsburg and U.S. Court of Appeals Judge Patricia Wald.

“You have tremendous ability to understand different legal regimes and dissect difficult legal puzzles,” Metzger told the graduates. “As important is your capacity for good judgment – your ability to zero in on what really matters and to be honest about your limits.”

Good judgment, she said, will require “clear-sightedness to recognize when the legal consequences you think should result are not the consequences that are likely to result.”

ON THE FRONT END

Success in the legal profession increasingly requires good judgment not only after law school but in deciding whether to go at all, and if so where. Still, slightly more than half of the 2,300 people who took a Lawdragon survey on law school satisfaction, said they would attend the same institution if they had to make the choice again.

“I applied to schools late, and I did not get into a state school that would have been about half of the tuition,” wrote one respondent. “Although I would probably, overall, do what I did all over again, I would be very tempted to wait another year and apply to the state school again to get the lower tuition.”

Want to tell us what you think? You can take the survey here.