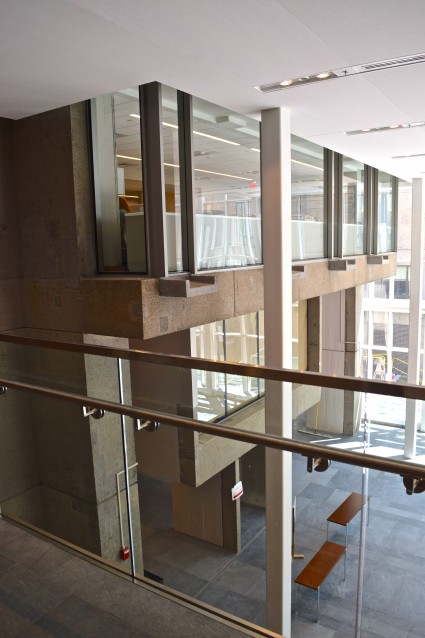 The lobby of the new Sumner Redstone building at Boston University School of Law wraps around the exterior of the old law tower, above. The school will begin teaching classes, including the Lawyering Lab, in the new building this fall.

Julianna Margulies as Chicago attorney Alice Florrek, “The Good Wife,” discrediting witnesses for the opposition with a few well-chosen questions.

Raymond Burr winning virtually every one of his cases in a 1960s black-and-white portrayal of Perry Mason.

But in these cases, art has manipulated life as well as imitated it. Such dramatizations have given thousands of prospective lawyers their first glimpse into the legal profession, enhancing its allure by what the directors show – the drama – and what they leave out – the hours of research and paperwork.

A courtroom brawl, after all, makes for good television. A conference room full of people in suits passing documents around and guzzling caffeine, not so much.

The result is that many students begin the first of their three years in law school envisioning careers as dazzling litigators.

BU Law’s one-week program, sandwiched between the fall and spring semesters in its new Sumner Redstone building, will introduce students to what that reality looks like, adding an element of practical application to a year dominated by classroom instruction and analysis of cases litigated in the past.

During the lab, students will build on transactional training from the fall semester to negotiate a simulated deal involving a U.S. health-care company and a small overseas firm whose new medical device has attracted the interest of the larger business.

Along with its experiential benefits, the program will extend students’ perspectives on law careers into client counseling – a major component of the profession overall.

If many traditional first-year case studies are akin to analyzing a train wreck and then applying the law to it, the lab is like advising two railroads where they might build tracks and when and how to use them so that both companies’ trains could reach their destinations without mishap.

The goal is for students “to try to anticipate what could happen in the relationship and plan for it and contract around it,” said Kent Coit, the director of BU’s transactional law program and one of the lab’s professors. “If the thing you’re anticipating could happen actually happens, what’s the outcome? That’s a way of thinking that lawyers do all the time.”

The three sections of the first-year class will be further subdivided into six groups of about 30 students, with two faculty members for each. Taking on the roles of attorneys for each of the two businesses, students will work in teams to evaluate and recommend options for a supply agreement. Their goal will be two-fold: structuring a deal that doesn’t need to be litigated because it works as both parties wanted and ensuring that, if the companies do end up in court, their client holds the winning hand.

“The exercise is meant to help students figure out how are we going to allocate these various plausible risks that we anticipate?” Tung said. “The more carefully we can allocate those risks explicitly in the contract and still come to agreement, the smaller is the range of potential messes that might trigger litigation. If the contract says, ‘Here’s how it’s going to go,’ there’s no lawsuit because both sides know who’s going to win if there’s a fight.”

The program had its genesis in a faculty task force set up by Dean Maureen O’Rourke to evaluate instruction in the skills most in demand for practicing lawyers.

It’s part of a schoolwide effort to increase students’ understanding of the competencies they’ll need and to deliver a curriculum that builds on existing teaching by developing a wider range of lawyering skills, O’Rourke said in a statement.

The law school is still determining how many credit-hours students will receive for the course, which expands an already broad catalog of experiential programs. BU Law ranked 11th among American schools in the percentage of eligible students enrolled in clinical courses, according to a Lawdragon analysis of the most recent data.

Such experience is increasingly in demand by law firms, which are less amenable to training entry-level lawyers on the job than in years past. Having it on their resumes gives job-seekers an edge in a market where the number of new lawyers each year has been roughly five times as large as the number of new jobs.

Heightening student awareness of potential career paths is an important piece of the Lawyering Lab’s mission, especially “given the current legal marketplaces,” said Coit, who joined BU Law after retiring as a partner at Skadden, Arps, Slate, Meagher & Flom LLP, where he worked in the mergers and acquisitions department almost 30 years.

“The sooner we can give them a fuller view of what lawyers do in the real world,” he said, “then the more likely it is that they will make an informed decision of where they want to be.”