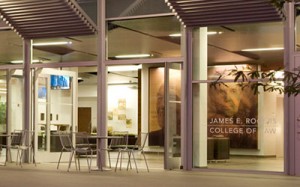 Don’t confuse the bachelor’s degree in law that the University of Arizona will offer this fall with the bachelor of laws degree that was the early 20th-century standard for attorneys in training in the United States.

The names sound alike, but that’s where the similarity ends. The bachelor of laws, or LL.B., was the ancestor of today’s juris doctorate degree and provided entry to the practice of law. Arizona’s program, designed for undergraduates, prepares students for some law-related jobs but doesn’t qualify them to become licensed attorneys.

Arriving against the backdrop of an oversaturated job market that has left some law school graduates heavily indebted and struggling to find work, the degree offers a choice for students who want the edge conferred by legal training but whose prospective careers don’t require them to become attorneys. The school says it’s the first degree of its kind in the U.S.

“Given that people trained in this way haven’t been out there before, we see the demand side as pretty potentially limitless,” said Marc L. Miller, dean of Arizona’s Rogers College of Law. The university views the degree as a good way to prepare students for careers including corporate compliance, city planning, health-care administration and human resources, according to a statement on the school’s website.

“The cost of being trained as an undergraduate in this area is significantly less” than obtaining a juris doctorate, Miller said in a telephone interview. “It will let a large number of people both join the working world and explore and be trained in law.”

Miller said the school expects some students will “love what they see and go on and get the JD.” Indeed, the school will offer a “3+3 program” that allows students to complete a bachelor of arts in law and a juris doctorate in six years instead of the seven normally required for both.

The program is a joint effort of the law school and the University of Arizona’s School of Government and Public Policy, part of the College of Social & Behavioral Sciences. The law school has hired a lawyer as the program’s director as well as a contract teaching fellow, while the School of Government has added a new full-time adviser, Miller said.

How many students select the major won’t be clear until fall enrollment is completed. Total demand may take two to three years to evaluate, since undergraduates might not take courses specific to their majors before their third or fourth years.

“As we looked around the classes that were offered throughout the University of Arizona, there weren’t that many courses on legal subjects offered by other departments,” Miller said. “So we expect the demand for the major to be good and demand for the classes to be very, very high.”

The new degree was sanctioned by the American Bar Association’s legal education section, which accredits law schools on behalf of the U.S. Department of Education, in the spring and will be awarded to 2015 graduates.

Students in the program will take core courses at the School of Government and the law school. They will also complete an additional 15 units enabling them to specialize in areas such as international, family or business law, the university said.

Teaming with the School of Government for the degree makes sense in part because of students who want city or county jobs in which being able to read a contract and understand legal language would be an asset, said Chad Westerland, the school’s associate director and an associate professor of political science.

Although enrollment of first-year law students in the U.S. dropped for the third straight year in the fall of 2013, sliding 11 percent to the lowest since 1975, the University of Arizona is still seeing student demand for legal careers.

“Some of that means law school, but as much as anything, it means wanting to have a skill set that allows them to work in professions where a legal skill set is a major advantage,” Westerland said.

Indeed, first-year enrollment at the Rogers law school dropped 3.7 percent in the fall of 2013, significantly less than the nationwide total, according to data collected by Lawdragon. Rogers ranks among the top 20 schools in the U.S. in the number of employed graduates holding government jobs, the data show.

Obtaining the new bachelor’s degree won’t qualify students to take a bar exam. In the U.S., that generally requires a juris doctorate, though some other countries allow lawyers to be trained at the undergraduate level.

“Whether or not the profession will want to respond to the undergraduate training over time is, I think, a much longer-term question and not something we’re trying to force,” Miller said. “We really see the professional opportunities without in essence requiring a forced question on whether or not the student who’s trained and otherwise prepared and could pass a bar exam should, absent a JD, be admitted to the bar.”