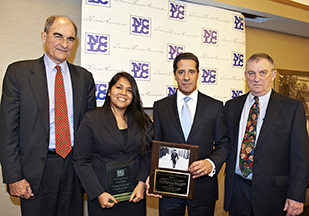 stet, a third-year Stetson University College of Law student, is an advocate for children and education reform. She traveled to New York City last year to accept the prestigious New Generation Award, a special Lewis Hine Award for Service to Children and Youth. The award is named for the National Child Labor Committee photographer who documented early 20th century exploitation of children to facilitate child labor reform.

Accepting the award in New York was a homecoming for Alamo, who grew up in the city and attended high school at the Community School for Social Justice. There, Alamo explained, she took much of New York’s social inclusiveness for granted. It wasn’t until Alamo came to Florida as a college student more than five years ago that she says she noticed a palpable need for social justice advocacy in her new community, especially among young people. She began to focus on mentoring and improving the lives of teenagers.

“We teach students to be inclusive rather than tolerant,” Alamo said.

By creating social situations where students experience what it’s like to be discriminated against, and encouraging dialogue about the experience, students learn why it’s important to advocate against discrimination, Alamo explained.

Alamo began working with Community Tampa Bay in St. Petersburg, Fla., where she assisted ANYTOWN, a five-day residential program for young people that encourages youth leadership and diversity education. Alamo, 26, has already affected the lives of more than 1,000 young people.

“All systemic social justice issues can be changed with quality education,” said Alamo, who plans to work in education law and reform after graduating from Stetson in May. “Quality education and cross-cultural interactions can reverse prejudices that we are all conditioned to have. Youth can change things.”