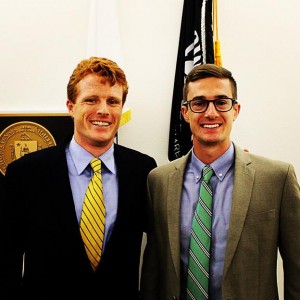 Brendan G. Corrigan is single-minded about the need to protect the civil rights of lesbian, gay, bisexual and transgender citizens in the United States. And as far as Corrigan is concerned, those protections must begin at home – literally – given the lack of statewide protections in Pennsylvania, where he lives.

That’s why Corrigan worked alongside Bristol Councilman Greg Pezza to draft and introduce in his hometown a nondiscrimination ordinance that included both sexual orientation and gender identity as protected categories in terms of employment, housing and public accommodation. Indeed, a centerpiece of his lobbying campaign with members of the Bristol Borough Council, he said, was the importance of local efforts in the absence of state protections. The ordinance was approved unanimously on September 9, 2013.

Corrigan, who is in his fourth year of a JD/MPA dual-degree program at the University of Miami School of Law, said he gained considerable insight into local nondiscrimination policies as a law fellow with the Human Rights Campaign in Washington, D.C., during the summer following his 2L year.

He honed his service sensibilities after his 3L year, working as a summer intern for U.S. Rep. Joseph P. Kennedy III of Massachusetts. In addition to compiling memoranda and briefings on a broad spectrum of issues, Corrigan managed constituent contact and outreach procedures, including assembling constituent feedback forms and maintaining the office’s constituent input database.

“Kennedy is a progressive Democrat serving his first term in Congress,” he said, “and as a graduate of Stanford University and Harvard Law, a former Peace Corp Volunteer, former criminal prosecutor and now member of Congress, his life work reflects the Kennedy family’s distinguished record of public service. In many ways, I hope to emulate his career and record of service.”

Corrigan continues advocating for LGBT equality in published opinion pieces, motivated by the understanding that to affect policy change, he must change the hearts and minds of members of the public first.

In March 2013, he wrote an op-ed for the Bucks County Courier Times, a suburban Philadelphia newspaper, advocating the advancement of marriage equality as one component of a broader civil rights movement in the United States. He “ghost-wrote” a similar editorial in July 2013, published in the Huffington Post, on behalf of former U.S. Rep. Patrick Murphy.

The op-ed piece he saw published the following November in the Miami Herald criticized Republican Senator Marco Rubio of Florida for voting against the Employment Non-Discrimination Act. Corrigan’s argument: Bigotry and discrimination serve no purpose in the workplace.

BRENDAN G. CORRIGAN: Having grown up in the Northeast and attended an undergrad institution in the Southwest, I wanted to use my time in law school as an opportunity to experience life in a different region of the country. I specifically chose to attend the University of Miami School of Law because the city’s atmosphere is that of a young, vibrant and diverse metropolitan area, and because of the school’s steadfast commitment to empowering law students who intend to pursue careers in the public interest.

BGC: How great a privilege it is to attend law school and become an attorney. I’m sure you’ve heard the phrase, “To whom much is given, much is expected.” That is the absolute truth. My experience in law school has reinforced that principle for me.

I say it’s a privilege to attend law school because a legal education equips individuals with the skill sets to make the world a better place in ways large and small. So, I challenge future law students to make their law school careers more than just about themselves by giving back to their communities.

LD: What has been your most memorable law school experience so far?

BGC: The summer following my 2L year, I was a law fellow at the Human Rights Campaign in Washington, D.C. I was fortunate to be on the steps of the United States Supreme Court building, among a crowd of equality advocates, the moment when the Defense of Marriage Act was struck down. It was a surreal experience to be part of a significant moment in U.S. history. That day was an experience that I hope to share with my kids and grandkids in the future.

BGC: I am very interested in the confluence of law, public policy and politics. I would be honored to have the opportunity to serve others and be a driving, positive force in the lives of both individuals and communities. I think one manner of achieving that objective is in politics, and I see a run for public office in my future.

Initially, I came to Miami Law with the intention of pursuing a career as a federal prosecutor, because I saw that as an opportunity to help make communities and neighborhoods safer. As an openly gay individual, however, I feel a social responsibility and personal obligation to help cultivate a society more welcoming and accepting of LGBT individuals than it has been. My career interests have thus shifted from prosecution to policy and legislative advocacy.

In my estimation, LGBT equality is the next frontier in our nation’s broader civil rights movement, and I am hopeful that my generation will bring to fruition the full equality and inclusion of LGBT individuals.