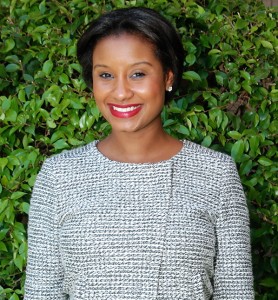 Even as a college undergraduate, Kristy Brumfield wanted to be a lawyer. That is, of course, why she earned a Ph.D. in biochemistry and teaches as an assistant professor in Xavier University of Louisiana’s biology department.

“Makes perfect sense to me,” said Brumfield, a 2L part-time evening student at Loyola University New Orleans College of Law. “The appeal of law school, for me at least, was the intersection of science and law.”

On the science side of that intersection, she said in an interview, stood questions of how scientists convey to the public issues regarding the ethics of research and experimentation, for example, and how much money is used and needed to fund what. On the law side, she said, “I saw lawyers in legislative roles, and with no understanding of the science involved, making decisions regarding issues such as research ethics and funding.”

New developments in the field of energy, especially biofuel resources, quickened Brumfield’s interest in a law career. As she explained: “I saw opportunities to create laws and public policy that, for example, might convince oil companies and others holding new energy source patents to implement those new, environmentally sound technologies.”

As a graduate student, Brumfield was a National Science Foundation IGERT Fellow:  This is the NSF’s flagship Integrated Graduate Education and Research Traineeship program, which trains Ph.D. scientists and engineers to work in interdisciplinary settings.  Brumfield completed her Ph.D. in 2009 and for the next five years taught, mentored students and ran grant programs at Xavier University.

“I really understood how the field of law affects all aspects of all the sciences,” Brumfield said, “the practice of science, the ethics of it, the possibility of innovation that doesn’t adversely affect the environment.”

She also began wrestling with diversity within science – or, rather, the lack of it. “As a woman, as a black woman who is a scientist,” she said, “I recognized how difficult it is for us to go through the process of the Ph.D., through the tenure process, through the processes that leads to high-level administrative jobs while trying to balance being home with your children. Do we get passed over for promotions, for increases in salary? I wanted to lead by example and also help fashion law and education policies that will help women in the sciences achieve this balance.”

Brumfield said she waited for the opportunity until her daughter, Leah, was older and, frankly, “because I’d been in school essentially since kindergarten without a break.”

After her 30th birthday, she decided it was time. “I always wanted that law degree,” she said. “Now, I’m going to get it.”

KRISTY BRUMFIELD: I chose Loyola because of its reputation. I’m referring to the fact that the legal community in New Orleans is very close-knit, and so many of the members of this community are Loyola graduates who have had extremely successful careers. I wanted to be a part of such a community for networking purposes and to make lifelong, collegial friendships.

As important, Loyola Law had not only a terrific curriculum, with several proprietary offerings, but also a well-established evening program for part-time students. That has allowed me to care for my daughter and continue at Xavier teaching introductory biology for first years and a senior-level scientific literature course: basically, how to read research articles and appropriately critique the experimental methods that the scientists used.

I’ll graduate in four years – that’s 2017 – without a lot of debt, since my job has helped defray my expenses.

By the way, I was interested to find that a lot of the prominent New Orleans attorneys who graduated from Loyola attended the evening program precisely because they needed that opportunity to work full time and go to law school. Loyola, which also has a part-time day program, allows people like me to keep things rolling in our personal lives and study law.

KB: My study abroad experience in Salzburg, Austria, has been the most memorable and valuable experience so far. This past summer, I attended the 15th annual Summer School Program offered by The Academy of European Private Law and the University of Salzburg’s Department of Private Law. The focus was comparative law in the European Union and civil code in particular. The program afforded me the opportunity to explore the different legal systems and the traditions of law in most European countries.

I was the only American there. And I have to say it was amazing to meet civil law students from all over the world – from Croatia, Portugal, Malta, South Africa – to learn more about the origins of the civil code and compare Louisiana’s civil code, which has a historical framework in the French civil code.

That raises another important attribute of Loyola New Orleans, another advantage that I’ve enjoyed by coming here: Dean María Pabón López and my professor, Dr. Markus Puder, who has taught international law, comparative law, civil law and environmental and energy law, sponsored my attending this summer program and have encouraged me throughout.

Across the board in my educational experiences in the sciences I’ve seen disparities in opportunities for women. It’s hard for women to move into higher-ranking administrative roles in the sciences. It’s hard going when women simply want to be considered for promotion and also be supported in, say, caring for their children. As a woman in the sciences, as a woman with a child, as a professor seeing students at the start of their science careers, I realized there must be people knowledgeable about the world of science and about the law to fight for individuals who experience these disparities.

I someday hope to work either as corporate counsel of a corporation or as general counsel for a university. I want to be on the forefront creating and enforcing policies that will make companies or universities diverse as well as environmentally sound.  Would I like to stay in Louisiana? I’d love that. There’s a lot to be done here in the state.  I hope to affect for the good the environments in which I grew up.