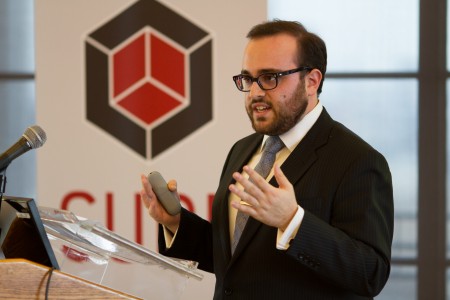 Jared Brenner went to law school so that he could learn to protect musicians and other artists in ways they didn’t – or couldn’t – themselves.

“I was involved with a lot of creative people as an undergraduate in D.C.,” Brenner, a 3L at Brooklyn Law School, said in an interview. “I was even in a band; we weren’t very good and we didn’t have a following. But it taught me that creative types don’t always think about business first, if at all.

“Their work is from the heart, it’s about having something to say and share. I wanted to be the bridge between them and the ‘suits’ or business side of what they create.”

What he found at Brooklyn Law was a new kind of creative community of which he’s become a prominent proponent and member: entrepreneurs of the tech startup variety.

“They have the same creative energy, mentality, impulse and uncertainty around their work that every other creative individual has,” Brenner said. “Being with them, I ended up feeling the same kind of excitement I felt for new bands.”

“They don’t always anticipate how to deal with the fallout if their business blows up or fails to gain traction,” Brenner said. “Their idea of an agreement is a handshake or a bare-bones piece of paper saying who they are and what they’re about. Meanwhile, 90 percent of startups fail. Those are the same odds stacked against musicians. They need a general counsel simply to write operating agreements that encapsulate their mission, their intent and that also deal with all the contingencies of being in business.”

“The clinic has led me to simultaneously pursue policy initiatives focused on areas of law that lag behind the needs of new ventures and emerging industries,” he said. It’s one reason that he’s an inaugural fellow of the law school’s new Center for Urban Business Entrepreneurship, or CUBE.

Outside law school, he recently became an outreach officer and assistant organizer in New York Legal Hackers, which he describes as a national organization of policy-minded, tech-friendly and generally young lawyers with interests similar to his own: exploring solutions to issues involving law and technology.

The group has apparently fueled Brenner’s own inventive proclivities: He co-created a student organization – Brooklyn Law Entrepreneurs – for students interested in startups and entrepreneurship who want to be connected with the BLIP Clinic, CUBE and with the New York startup community.

JARED BRENNER: Location was crucial. It’s no secret that Brooklyn is the place to be for music and media these days, and it seemed like the perfect place for me to start fresh after several years in Washington, D.C.

I certainly saw endless opportunity here – a chance to make new connections daily and broaden my reach beyond the legal community to include the artists and creators I hope will one day be my clients and collaborators.

I also liked the professors, the deans and other administrators I met on Admitted-Students Day. Something about their tone and the way in which they presented the school said I wouldn’t simply be admitted, but enthusiastically accepted, welcomed. And I was impressed with what they said about the programs in which I ultimately participated.

I actually applied twice to law schools – first, at the end of college, when I realized that in many ways I wasn’t ready to go. I applied again a year later, after working and learning a bit more about myself and what I wanted from a career in law. The gap year gave me a good perspective on financial aid – and I must say that Brooklyn’s offer really stood out.

Yes, my scholarship is merit-based. Like all scholarship recipients, I needed to be aware of that and of the scholarship’s academic requirements.

The result is that I’ll graduate with debt, but it isn’t crushing debt. I’ll be able to follow the career I’ve dreamed of, working with creative people.

I often advise friends considering their choices in law schools to prioritize finances and merit scholarship opportunities, because not enough applicants do. It’s so important to minimize your debt because that maximizes what you can do with your degree.

In the end, you need to understand that no one law school is right for everyone. You have to carefully compare your choices and find the one that is right for you. For me, Brooklyn Law was very right.

JB: That your fellow students don’t really know what they’re talking about in the beginning – and neither do you. That study groups are, until exam time, so much less important than believing in your own notes and understanding each professor’s method and philosophy. That persistent attendance at networking events around the school can pay incredible dividends. That there is no safer sandbox than a law school classroom in which to overcome a fear of public speaking. That there is such a thing as too much coffee.

JB: The CUBE Innovators Competition, for which I was awarded my CUBE Fellowship. The idea is for CUBE to be a kind of mission control for exploring legal issues around entrepreneurship and for providing legal representation and support for new businesses. Through CUBE, Brooklyn Law also wants to train the business lawyers who can both advise and become entrepreneurs.

Entrepreneur – that’s the role I was stepping into in preparing for the Innovators Competition. It almost felt like a final exam. Based on a proposal I’d submitted in advance, I had to write and rehearse a five-minute pitch for a complex policy project that had been rolling around in my head for months. I’ve been on stage in other settings, but never before a panel of judges like an episode of Shark Tank.

During my presentation, I stumbled over my words for a moment at the beginning and had to recover and improvise on my own. What followed was the fastest five minutes of my life.

As stressful as the preparation felt, winning the competition made it all worthwhile and pushed me to new levels of self-confidence in my work. I also realized that thinking and speaking on your feet is the most transferrable skill a lawyer can have.

JB: I had less of a plan when I got here than you might think. I was aware of the BLIP Clinic, which is meant to function as a technology-oriented law firm within the startup world, but knew very little about either. My goal was always to find an unconventional way to use my J.D. What I mean is outside the realms of litigation, finance and government. I think I’m close to realizing it.

I will be taking the New York bar exam and, down the road, I’m likely to take the bar exam in California. Currently, I am exploring multiple opportunities in digital media, and I hope to finalize a position soon.