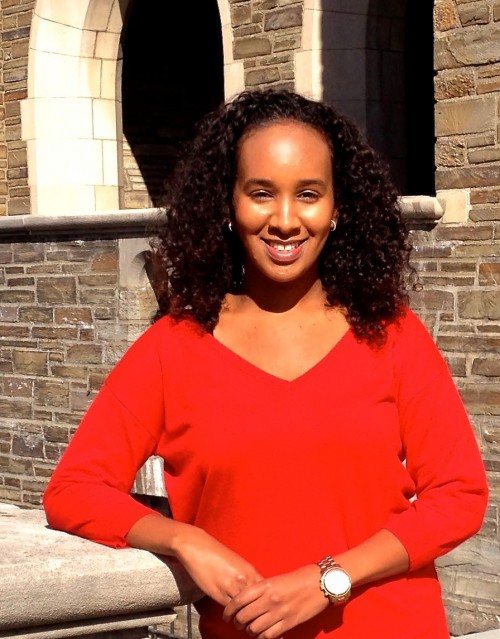 Nora Ali, a 3L at Cornell Law, knows the value of finding the right fit in a law school.  Not because Cornell helped her secure an interview with Paul, Weiss, Rifkind, Wharton & Garrison in New York, the prestigious U.S. firm where she will be working after graduation and passing the bar.  But because after a near disastrous first semester, Cornell Law enabled her to marshal her considerable intelligence and abilities, and reverse the fall.

“Bottom 10 percent,” she said in a telephone interview. “That’s where I was according to my 1L first-semester grades. Maybe even the bottom 10 students. But by the time I was interviewing for jobs, I knew that I was more than my grades; I owned everything I am, all that I’ve accomplished.”

So what happened after that first year to put her on track? It started with an e-mail from the dean of students inviting her to talk about her grades and a plan of action for ensuring her ongoing success.

“Cornell arranged for an upperclassman to tutor me in the course with which I was struggling the most,” Ali said. “I met with each of my professors and basically said, ‘What am I doing wrong?’ They helped me figure out how to study, how to do the research, how to learn.

“One professor in particular, Sheri Lynn Johnson, became the mentor and friend I needed. Meeting with her, speaking with her — it completely changed my law school experience and quality of life.”

What she learned was more than the law. “Cornell taught me how to succeed on my own terms,” she said.

LAWDRAGON: Why law school, especially since your background was in health and medicine?

NORA ALI: I love problem-solving, and I’ve always wanted to fix the world. My dad’s an engineer and my mom is a nurse, and from what I could see, engineering and medicine both seemed to be careers that would enable me to do just that.

I went to a magnet high school that focused on architecture and engineering; I even qualified as a certified drafter. After college, I spent three months volunteering at the Edna Adan Maternity Hospital in Hargeisa, Somaliland, where I assisted doctors with research, and helped teach midwifery students and pharmacy students about reproductive health, so they could reach out to their peer groups. I conducted research in Kakinada, India on attitudes and coping mechanisms of HIV-positive women with children during the summer of 2010.

What tuned me in to law as a possible career also started with my parents. They were immigrants from Somaliland who couldn’t easily engage with the community in which they settled, only in part because we were black, Muslim Africans – possibly the only ones in the town. As the oldest child, sometimes I felt they did not have the best understanding of things, like the dynamics of a parent-teacher conference or the college application process, since these were unfamiliar to them.

I realized over time that I was acting as an advocate for them and for my brothers. I wanted to protect them. That’s when I started thinking about advocating on a broader scale.

What crystallized my commitment to law school was taking classes with this one high school world history teacher. He was tough on us intellectually. I had always relied on books for answers. He made me understand that while book learning helps inform answers, I’m the one who has to harness my reasoning abilities and brainpower to think through what I believe.

He told me that law school would help me sharpen those skills and way of thinking. He also convinced me that engineering and medicine enable problem solving more often one-on-one. A law career would enable me to work for broader systemic change.

LD: What were some key factors you used to choose your law school?

NA: I applied to seven law schools, focusing on the East Coast to be within a day’s drive of my family. When the acceptances arrived, I narrowed my choices to New York University and Cornell. There were factors in my final decision, such as financial aid, job placement and curriculum – NYU, for example, had a great human rights/international law program – that were critical. But I also wanted to pick a school that was as eager about me as I was about the school.

As soon as I was accepted at Cornell, I was invited to alumni receptions where I met individuals who are very invested in the school. Some of my current mentors are successful individuals I met months before I decided on a law school.

I was also attracted to Cornell because of its location. Yes, Ithaca is gorgeous, but there are also few distractions for students or professors. Faculty members are always happy to meet with students to not only discuss class work, but to see how the semester is going and to look to future goals. More important, faculty members here are interested – truly invested – in seeing you achieve those goals.

What really sold me on Cornell was seeing that amazing professor interaction firsthand, before I was committed to the law school. While in Somaliland, I read an article mentioning that a member of the Cornell Law faculty, Professor Muna Ndulo, was working as a consultant assisting Somalia with its new constitution. I reached out to him and introduced myself. He responded right away – while traveling in Zambia and South Africa – to say he would love to hear my thoughts on the situation in Somalia.

It was such a warm and humbling response from a constitutional law expert. After moving to Ithaca, I met with Professor Ndulo and he has continued to ask for my insights on some of his projects.

NA: First, I wish I knew to reach out to people, or felt comfortable reaching out to people – both students and faculty members – for guidance as soon as I arrived. While everyone was kind and people offered their help – I was even told to reach out – I thought law school was something you had to struggle with on your own, especially since my parents are self-reliant.

After a couple of months of 1L, I realized the most effective way to do well in law school, and maintain sanity, was to seek advice from both upperclassmen and faculty members. I saw that law is amazingly collaborative, and not purely competitive. The people who did the best and enjoyed law school the most understood that. It certainly helped make 1L more manageable for me, and it helped me form incredible relationships.

Second, I wish I knew that at some basic level 1L year attempts to mold you and your classmates to be cookie-cutter versions of one another, and that you don’t have to be exactly the same; variations on a theme works just fine.

Let me explain. All 1Ls take the same courses and have the exact same professors with 30 other classmates. You’re graded on a curve established by the performance of everyone in your class. After a while, you start to think the majority approach is best when it comes to class preparation and studying.

In reality, you should stick to what works best for you. Remember that you know how to study well and succeed – that’s what got you through your undergraduate years; otherwise, you would not have been accepted. I’m not a night person, for example. And while many of my classmates excel when they stay up until 3 a.m. studying, I’d rather wake up at 5 a.m. and go to it.

The same was true for the clubs and activities and special programs you choose to join. Emerging from that personally challenging first semester of 1L, I knew that if I was sincere and honest with myself, and always acted in ways that were true to who I am, I would succeed. So while everyone was running for president of something, I didn’t run for anything initially, because I couldn’t explain to myself, let alone others, why I was doing it.

At the last minute, I ran for president of the Black Law Students Association, because I recognized that I wanted to provide to other black students what I was missing in my first year – a peer of some kind to mentor me right away, someone who wasn’t going to wait for me to reach out, if I ever did reach out. I’m talking about someone who would tell me from the start that it was OK to do things my way and not the way everyone else did; someone who would tell me and remind me that grades matter, but that they’re not everything.

I had someone who fit that guiding role for me starting my second semester of law school – Professor Johnson. She helped me with everything from classwork, to advising BLSA members, to helping me find an oral surgeon when I had to get my wisdom tooth pulled a week before finals. Finding that person – whether it’s through a student group or someone in the faculty – can completely change a law school student’s life.

NA: There are two that have made Cornell really worthwhile. The most valuable has been participating in and helping plan the Professional Development Boot Camp, sponsored by the Black Law Students Association, Latino Law Students Association and Native American Law Students Association. Boot Camp allows first-year law students who are members of these three affinity groups the opportunity to learn from and network with representatives from prestigious law firms, public interest groups and the government.

As the first person to study law in my family, I can attest to how incredibly helpful it is to learn how to navigate the legal profession before interviewing for jobs. Professional Development Boot Camp is designed to do just that.

Personally, my most memorable experience has been participating in the Capital Punishment Clinic. Students in the course represent a client on death row. Last spring, six students including myself helped represent Johnny Bennett, who is on death row in South Carolina. We conducted research and began to draft his federal habeas petition. We also had the opportunity to meet Johnny.

It was unforgettable. Prior to the meeting, we knew him only in the context of his crime and trials. But speaking with Johnny humanized him. And it was a stark reminder of the lost potential; here was an intelligent, charismatic individual who made poor decisions at a young age and has struggled to identify himself outside of his crime since then.

He was also a stark reminder of the injustices in our criminal justice system that we need to correct. When we looked through Johnny’s trial record, we discovered that the prosecutors openly injected race into the trial and played on jurors’ racist fears. I mean Johnny is black, and his victim was black. Race wasn’t a motivation for the crime. Yet the prosecutor repeatedly alluded to racial stereotypes, referring to Johnny as a beast of burden, as King Kong.

My professor eventually questioned jurors as to why they had convicted Johnny and sentenced him to death. At least one juror said it was because Johnny was black – though this juror used the “n-word.” Clearly, at least one juror had been prejudiced during the trial.

NA: After graduating, I will work at Paul, Weiss, Rifkind, Wharton & Garrison in New York. I came to law school with the intention to work at a law firm, but the opportunities I’ve had in law school shaped the kind of work I’d like to do at the firm.