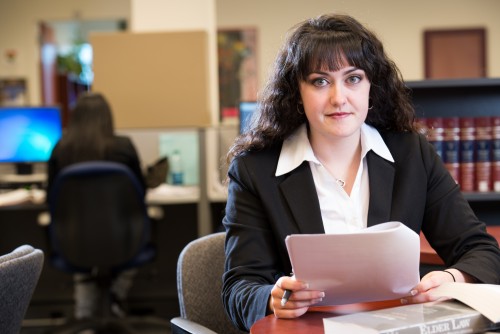 Alanna McGovern, a much honored 3L at the Touro College Jacob D. Fuchsberg Law Center, is among that rare breed of people who have wanted to be lawyers for as long as they can remember. So long that her family members – truck drivers, medical technologists, nurses, police officers but no lawyers – initially dismissed it as the babbling of a 4-year-old. That’s right, 4-year-old.

“It sounds kind of silly,” McGovern said in a telephone interview. “But I watched the O.J. Simpson trial and when I realized that everyone had to listen to the judge – Lance Ito – I knew that I wanted to do something akin to what he was doing, and that my mom would have to come to every one of my trials.”

Her family realized that her “I’m going to be a lawyer” was not the ranting of a teenager when she announced that she intended to practice, specifically, elder law. She was 13 years old at the time and both published poet and self-described science geek who had placed among the top 10 at the Brookhaven National Laboratory science fair.

McGovern explained: “My grandfather passed away when I was 13 and the doctor didn’t state that he died of his World War II injuries, which meant that my grandmother didn’t qualify for his wartime pension. This was money that she needed to live on.”

The whole family suffered as a result. “Ensuring that others didn’t suffer the same injustice – that’s what I wanted to do,” McGovern said. “And that’s when I knew where I needed to go with my life.”

She didn’t rule out other possibilities without careful consideration. At the State University of New York at Stony Brook, an institution best known as a public science research university, McGovern majored in English.

“I went to Stony Brook in case, as my mom thought, I’d discover that science was my métier,” McGovern said. “I didn’t. I originally majored in American Studies because someone in high school said it was a good track to law school. But I didn’t enjoy the courses as I did my English classes. I switched majors and at the same time joined a pre-law fraternity. It was the perfect combination.”

At Touro Law Center, McGovern is vice president of the Student Bar Association, the group that represents student concerns and interests to the faculty and administration. She runs all on-campus programs for the Phi Alpha Delta law society. She’s taken on internships and externships while taking full advantage of the faculty-supervised clinics that Touro Law offers.

She plays flute, piccolo, clarinet, oboe and piano. And she goes to the gym to box, too. “It keeps me sane, working out and then boxing whatever is stressing me out of my system,” she said.

As for her family: “They’re very supportive. After all, they’ve heard my lawyer mantra for 20 years. I think they’re just so proud that I’m actually doing it and following my dream,” she said.

ALANNA McGOVERN: I knew that days were going to be long and tough, so proximity to my family home on Long Island was essential. I had already figured how much I would have to spend to go to a school where I needed to pay for an apartment as well as food. Speaking of which, I’m not a very good cook, so living at home also meant having meals made while I focused on my studies.

In terms of New York City law schools, frankly the ones to which I applied and was admitted didn’t offer enough money to make them worthwhile.

The most important factor, however, was how the school made me feel. Touro made me feel like an individual and not a number or a face. It was so intimate and the people so warm and welcoming, I knew that this could be my second home, which is precisely what it is.

“Admitted Students Day” definitely influenced my choice, since there were faculty members, administrators and students not simply making presentations, but making themselves available to speak to us as individuals and to answer our questions. One third-year student in particular made me feel as if I could do this, that I could realize my dream: attend this law school and graduate with excellent chances of getting a job as a lawyer. Then I met other 3Ls who, again, by their own examples, reassured me that I could do great things here.

Funny about impressions like that. I remember distinctly, too, that the building itself was clean, attractive, homey; that the atmosphere was, well, respectful. It didn’t have a nasty competitive vibe. And in fact I discovered that Touro is the kind of law school where each person can learn in his or her own way. Your class rankings will depend on how well you do, not on you having an edge over everyone else.

You’ll never believe what confirmed that mine was the right decision: Dean Patricia Salkin called me at home. I mean, there I was, a new 1L. And there is the dean saying, “Hello. I’m new, too. Here’s my cell phone number. Use it when you want to talk.” I never expected the law dean to contact me personally, to reach out saying, ‘We’re both entering new territory. Don’t hesitate to call me if you need or want to.’

AM: How many gray hairs I would get that first year! Seriously, I wish I had had more of a background in law as an undergraduate at Stony Brook or during the summer – something that would have familiarized me with some legal basics such as terminology, legal jargon. First semester is hard because you are really learning a new language. I remember reading and outlining my first case: I had to read it four times before I started understanding what was being presented.

The only thing, then, I wish I’d known before entering law school was more law.

One aside – a pleasant surprise that I didn’t anticipate was that my law school friends would become more family than friends.

LD: What has been your most memorable or valuable experience?

AM: To be honest, there have been so many valuable experiences. Four, however, have been truly memorable. The first is that as a Hurricane Sandy survivor – my house lost one wall of its foundation and was flooded with 6 feet of water – I was able to help other disaster victims by participating in the Touro Law Center’s Disaster Relief Clinic. In a breathtakingly short amount of time I learned how to help people navigate the recovery process while giving them legal information to preserve their rights.

The amount I learned, the expertise I mastered in approximately four months was unbelievable, and it’s because of my experience in that clinic that I found a love for disaster law and public interest. I was even trusted to help run some of my professor’s walk-in clinics, in which another student and I led the clinic, giving legal advice in different Long Island towns devastated by the storm. It was so rewarding because by giving people even a little advice, we made their lives so much easier.

My second memorable experience stems from the first. Because of my work with the clinic, I was chosen to be a Long Island Community Foundation Fellow. This meant assisting Professor Sarah Adams-Schoen of Touro Law’s Land Use and Sustainable Development Institute research the systemic problems encountered on Long Island post-hurricane and possible solutions to issues we faced.

Since Long Island is so different from New York City and New Jersey, it was important to meet with many community-based organizations, including many of the prominent and well-known organizations on Long Island, to gather information for our white paper, which will be published in 2015.

The people I met for this project are remarkable and have put in so much time and effort to help the residents of Long Island and make such devastating post-storm scenarios a thing of the past. Each and every person with whom I spoke had passion and drive; not only did they give me important information, they also served as wonderful role models.

Third as a memorable experience, I was able to stage and participate in a mock trial through my trial practice class with New York Supreme Court Justice Joseph C. Pastoressa presiding. It was a completely unreal moment when he said that my trial, with my students, was the best he has ever adjudicated.

Finally, my work with the Elder Law Clinic, in which I helped many low-income people in guardianship proceedings, has to be my most satisfactory experience. I helped one man who was plagued by squatters who entered his home after he had suffered a massive stroke and abused him. We had the squatters evicted and I brought a family offense proceeding to protect him.

It seems that after the squatters entered his home, they threw him in a basement. He suffered five more strokes and was robbed of his identity and savings. Being able to help this man made me realize that the law is not just about applying statutes to situations; rather, it’s about using the tools you are given to shape a person’s life and make it better. And if I can do that for one person, I can do it for many and hopefully shape people’s lives for the better.

AM: Coming into law school, as I explained earlier, I wanted to work in the area of elder law. Post-law school, I now want to focus on estate litigation and possible disaster law work for the elderly.