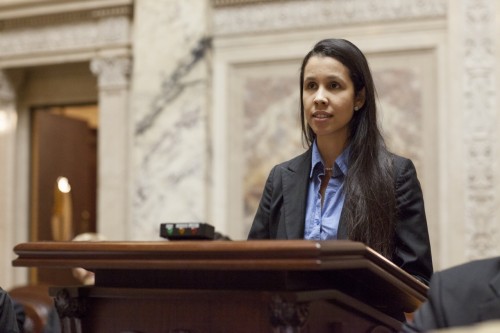 Advocating for disadvantaged or underserved communities is second nature to Lola Sophia Bovell, a third-year student at the University of Wisconsin Law School. Several years before she even applied to law school, Bovell was an admissions counselor and financial aid administrator at Keiser University in Fort Lauderdale, Fla., helping many first-generation and nontraditional students navigate the college admissions and financial aid process.

She had already completed a masters degree in Women’s Studies at the University of Florida. “The Master’s program allowed me to learn about a large community marginalized on the basis of something other than ethnicity and race, a community still subject to stereotypic views and treatment,” she said in a telephone interview.

Her interest began in her home state at the University of Florida, where as an undergraduate, “I became aware of the implicit ways certain people or groups of people had access to positions of power,” she said. “I started noticing, too, that certain communities had limited access to the routes to those positions of power. I was determined to do something about that.”

This wasn’t always Bovell’s aim. Hers was going to be a career in music, either performing or conducting. “My late father, an attorney, taught me to read music when I was 3 years old,” she recalled. “I played piano, then clarinet. I was in the band, I performed – I mean, music was my life.”

And then, it wasn’t enough of a life. “I attended a nationally recognized arts school in North Carolina, and realized that if I did study music, it would have to be in a much broader context – a large university, where I would have a more balanced education, where I could pick and choose among an array of programs and courses.”

What she picked was political science, along with various roles in student government.

“It was one of the best decisions I ever made,” she said. “Music wasn’t cutting it. But going to law school, becoming an advocate – more and more, that looked like my way.”

She has successfully followed that path in her years at the University of Wisconsin Law School, where she serves as the president of the Latino/a Law Student Association, membership chair of the Moot Court Board, class representative for the Student Bar Association and participant in the Immigrant Justice Clinic, the only such clinic in the state.

She was selected as an Advanced Opportunity Fellow and Public Interest Scholar and, recently, as a 2014 Ms. JD Fellow. The program, which is run in conjunction with the American Bar Association Commission on Women in the Profession, selects a group of outstanding law students from around the U.S. and provides them with financial support and a Brent Award-winning woman mentor.

Over the summer, Bovell interned at Latino Justice PRLDEF (for Puerto Rican Legal Defense and Education Fund, its former name) in New York City. There she worked on precedent-setting cases to help ensure that Latinos have more opportunities for political, economic, social and educational equality. “It’s what I want to do,” Bovell said.

LOLA SOPHIA BOVELL: I cared about a law school’s national prestige and reputation. I cared that it had a strong sense of community; it could be competitive but not cutthroat. I wanted there to be clinics in which I was interested. Given my work history, not surprisingly, I also cared about financial aid. Finally, I had earned two degrees in Florida, and I was ready to leave the state.

Yes, the school – like several others – had what I wanted. But I loved the way in which those recruiters represented the school and what they said. When I left, the seed had been planted, even though I wouldn’t go to law school for several years.

When I did apply I sent applications to about nine different schools – on the West Coast, in Florida, Indiana and Wisconsin. Wisconsin not only said yes, but also offered me financial aid guaranteed for all three years. And after talking with the people there, I just felt this is where I needed to go.

It was going to be cold; I wouldn’t know anybody. But it had tons of clinics and a tradition of hands-on learning. And living in Wisconsin, I knew, would be good for my personal growth: I grew up in a minority-majority community – Miami, Fla. Wisconsin would give me the opportunity to experience something new.

LSB: Organizing a fundraiser for UW’s Immigrant Justice Clinic (IJC), the only clinic in Wisconsin that provides free legal representation to individuals in deportation proceedings. It represents one of the concrete ways in which the law school is attempting to address crucial access to justice issues for minorities.

As a former IJC student, I can personally attest to the effect IJC has had on my fellow law students and me – training us to be cognizant of the interplay between and among race, poverty, language, culture, immigration status and the law.

When I was elected president of the Latino/a Law Student Association (LLSA), I discovered that the clinic was in its final year of funding and that its future with the university was uncertain.

IJC was founded two years ago when Latino law students banded together with local immigration attorneys and secured a three-year grant from the Ira and Ineva Reilly Baldwin Wisconsin Idea Endowment. In an effort to raise funds and increase awareness about the clinic, LLSA spearheaded a cocktail reception that wound up raising more than $13,000 and brought together leaders from across the state.

In addition, national civil rights leader, Juan Cartagena, flew in from New York City and spoke in support of the clinic. It was an inspiring event that showed the importance and effectiveness of student-led movements.

LD: What do you wish you knew about law school before enrolling?

LSB: I wish I knew how time-consuming law school is; how busy I would be. I would have prepared myself a bit better, mentally and emotionally. I would have come to law school with the appropriate mindset for that grueling first year. And Wisconsin Law isn’t cutthroat; people share notes; they’re friendly, supportive. Still, first year is challenging; you’re consumed with your work. Remember, too, that I’d been out of the classroom for years and wasn’t used to the work.

LSB: Practicing as a student attorney I’ve been surprised by how difficult it can be to have a work-life balance; how stressed many members of the legal community can be. Now, I’m both excited about practicing law and also determined to help other lawyers achieve that balance.

LSB: I came to law school to learn how to advocate for underprivileged communities in the legal setting. After assisting numerous clients in the UW Immigrant Justice Clinic, I realized that although my efforts helped those respective clients, countless others were being mistreated. I discovered that the problem is much bigger than finding more lawyers to work for indigent clients. The problem is often the law itself.

Individual lawyers can continue to strategically help clients navigate the judicial system. However, there is only so much they can do if the law is inherently flawed.

My ultimate career goal, then, is to advocate for policy changes that give every person, regardless of race, color, creed, religion, national origin, sex, gender, age, marital status, ability, veteran status or sexual orientation, equal opportunities for political, economic, social and educational advancement.