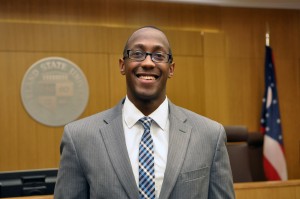 Enrolling at Cleveland-Marshall College of Law, Michael Bowen had an already established career in Cleveland, Ohio, politics. His mother was a two-term councilwoman and Bowen had worked for two mayors and multiple campaigns since 2009.

Bowen says that he knew early on that he wanted to blend his knowledge of politics and public administration into a career as a practicing attorney.

Three years into law school, he’s on his way to doing just that. Bowen is maintaining a full-time job as executive assistant to the mayor of Lakewood, Ohio.

What he might laughingly call his “free time” is spent on school-related organizations and activities: He’s associate member of the Cleveland State Law Review, a member of the Fredrick Douglass Moot Court team, a contributor to the school newspaper and president of the American Constitution Society.

Bowen recently added to the mix a strong interest in sports and entertainment law sparked by his participation in the Great Lakes Sports and Entertainment Academy hosted at Cleveland-Marshall.

MICHAEL BOWEN: Two very important things led me to Cleveland-Marshall College of Law. First, there was the opportunity to attend law school part-time so that I could maintain my full-time job, which of course also meant staying in or near the Cleveland area. I enjoy my job immensely and am loyal to my boss for the opportunities that have arisen from my work. I was also determined to attend law school, however. Cleveland-Marshall allowed me to do both.

Second, there are the networking opportunities. More than 65 percent of the lawyers in the Cleveland Bar Association are Cleveland-Marshall alums. The opportunities that Dean Craig Boise and the rest of the law school’s faculty and staff give students to interact with prominent alumni are unprecedented. Numerous times I have been in the same circle of conversation with managing partners from some of the largest firms not only in Cleveland but in the world – firms such as Jones Day and Squire Patton Boggs.

MB: How much better you will do if you just relax and put law school in perspective. Once I learned that, I found law school was a lot more enjoyable.

MB: Participating in the Great Lakes Sports and Entertainment Academy at Cleveland-Marshall. This academy is run by Professor Peter Carfagna (former general counsel for IMG) and exposes students to some of the best legal and business minds in sports and entertainment. I learned the legal aspects of TV, movies, music and sports from individuals who actually live it. The lessons I gained in contract formation and negotiating will stay with me forever.

LD: What do you plan to do with your law degree? Has that changed at all?

MB: I plan on practicing public law – labor and employment, government affairs, real estate – in a large firm in Cleveland. What has altered is the addition of a sports and entertainment practice.  My overall plans have never really changed since attending law school. I attribute that to being exposed to the work I want to do as a lawyer before I entered law school.