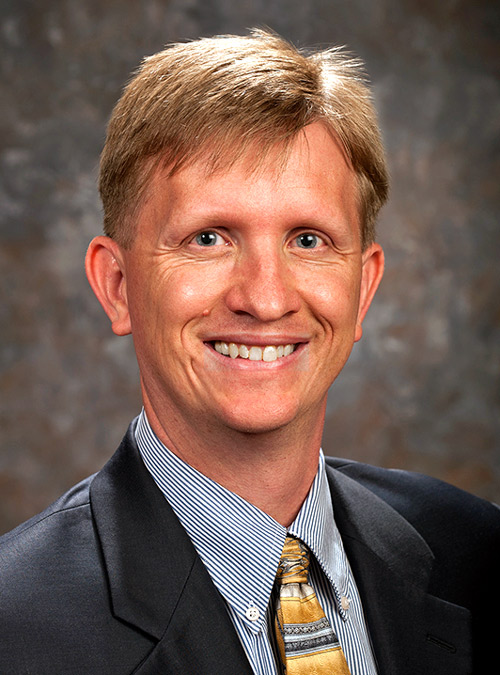 Matthew J. Wilson, dean of The University of Akron School of Law, says he’s “all about non-tradition.” Tracing Wilson’s path to and through legal academia suggests he may be more about following tradition in surprisingly unconventional ways.

Start with his decision to become a lawyer. He was 4 years old and a Sunday regular at The Church of Jesus Christ of Latter-day Saints. “Afterward, I would travel this route to some neighbors’ houses – including Donny and Marie Osmond’s grandparents and a widow named Alice – to talk,” Wilson said. “I loved to talk.”

Alice noticed. That’s why when Wilson asked her what he should be when he grew up, she suggested becoming a teacher, lawyer or politician. “When I asked what these professions were about, Alice said they all talk a lot and they help people,” he said. “Then she told me my dad was a lawyer.”

It was the genesis of his law career.  “As I matured, I recognized the diversity of practice areas and that I would never be bored,” Wilson said. “That sealed it.”

The goal, that is, not how to reach it. At age 19, Wilson volunteered to serve a two-year Mormon service mission. The church, which could have sent him anywhere, chose northern Japan. “My family and friends were thrilled,” he said. “I wasn’t. I didn’t speak the language; knew nothing about the place, and I hated rice, which I thought at the time tasted like cardboard.”

That all changed as he grew to know Japan. Walking around the country’s frozen tundra, he said, he realized that he could combine his newfound interest in Japan with his long-term interest in law and become an international litigator.

Coming back to the U.S., Wilson returned to the University of Utah, where he met the Japanese student who would become his wife. “She was out of money and going home to Japan to earn enough to finish her degree,” he said. “I chased her there and we soon married; I worked for several years, then we came back and I finished two undergraduate degrees.” Turns out he finished them in two years total time: one in political science and another in Asian studies.

Looking at law schools, Wilson zeroed in on Temple University’s James E. Beasley School of Law. “With a top-rated trial advocacy program and a campus in Tokyo where it was opening a spring semester-abroad law program, it was so obviously the right school for me as a law student,” Wilson said. “Much as Akron Law is now for me as dean.”

It was at Temple, studying in Japan as a 2L, that Wilson became interested in legal education.

“In the middle of a class on Japanese law, as I was listening to this amazing instructor, I suddenly thought, ‘I want her job; I want to make this kind of a difference in people’s lives,'” he said.

It wouldn’t happen immediately; Wilson’s life hasn’t been that linear. He took a one-year leave of absence to participate in a three-month complex civil jury trial in the Western Pacific (Saipan). He interned for international law firms in New York City and Philadelphia immediately afterward. Coming out of law school, Wilson signed on as an associate with Akerman Senterfitt P.A. in Orlando, Florida, interested in creating an Asian and Japanese practice. He ended up handling international matters in the U.S., Caribbean, Europe, Asia and Japan.

Two years in, the director of Temple’s Japan program left for a corporate counsel position at Morgan Stanley. “Recalling that day in Japanese law class, I thought, huh, I wonder if Temple would even consider me for the directorship and a faculty position,” Wilson said. “I applied and landed the job. But after much consideration, I thought that I needed more practical experience to be the most effective law professor for my future students. Reluctantly, I turned Temple down and went back to the practice of law.”

Soon thereafter, one of Wilson’s clients came calling. From 2001 to 2002, he served as general counsel at YPD.com/Advanced Telecommunication Network Inc. before returning to Akerman as a senior associate. In these capacities, Wilson litigated around the country, spearheaded a variety of corporate transactions and acquisitions, and handled the legal affairs of several companies.

That’s when Temple asked him again to join its faculty and run its study abroad and LL.M. program in Japan. This time Wilson said, “Yes.” He began in 2003, first as law program director and associate professor of law; then as general counsel, associate dean and senior associate dean. During the next six years, as Wilson oversaw all matters relating to undergraduate, graduate, professional and non-degree programs, he quadrupled enrollment and revenue. “I like to think I took a good program and made it robust,” he said.

In that same period, the Japan Federation of Bar Associations appointed Wilson to serve on its Jury Trial Advocacy Project Team (2005-2009), coincident with the adoption of quasi-jury trials. He also served as an interviewer and external evaluator for the Japan – U.S. Fulbright Program.

In 2009, Wilson joined the University of Wyoming College of Law. “We came home for family reasons,” he said. “Our youngest of four, James, is a piano prodigy. We realized that he needed to be taught by the best.” The University of Wyoming was hiring and wanted someone who could create an international program. “They also needed someone to teach intellectual property, and I could provide both,” Wilson said. “Turns out that the university has an amazing piano department as well.”

LAWDRAGON: What makes Akron and you such a good fit?

The allure was in part the existence of a phenomenal intellectual property program and a top-notch trial advocacy program, which appealed to the litigator and the IP person in me. But the most important draw was the amazing faculty and their engagement with the students. In the end, it’s all about the students. And the fact was that Akron’s students were happy.

As important, I felt that I brought something valuable to Akron, and that’s my extensive international background and connections around the world, particularly in Asia. I saw that I could reasonably quickly ramp things up on that side.

You know, I’ve lectured about the globalization of law and global opportunities in law some 350 times in 130 law schools and here’s why: It was so hard for me to really find out what international law was and was all about as I set my sights on a career in that field; I’d like to ease the way for others. As dean I can do that here at Akron Law, in partnership with the faculty, by creating or enhancing programs, by teaching and more.

Moreover, I’m coming here during challenging times for law schools and legal education and to a faculty and staff who, during my interviews, gave me comfort in their responsiveness to us being more entrepreneurial, creative, a bit nontraditional.

LD: What do you see as your mission and goals for Akron Law?

And we can do this quite easily, given the global nature and expertise of our faculty. We made three international hires this year. Jacqueline Lipton, an Australian and experienced international practitioner and scholar, heads our IP program. Patrick Gaughan, with a JD from the University of Virginia and an MBA from Trinity College in Ireland, leads our entrepreneurial center. Two other faculty members worked in Switzerland, another in France, while others have studied or spent considerable time overseas.

There’s more, especially given that about a third of our faculty have significant international experience, but you get the idea.

LD: What else distinguishes Akron from the competition?

MJW: A host of things. There are some basics that make us very appealing, including a baseline tuition for out-of-state students of $25,000 a year and a flexible part-time program that allows students studying for their JD to work and take classes by day, in the evening, full-time one year, part-time the next – whatever works for them.

We have a distinguished faculty devoted to teaching in a city that is an affordable revitalized center of entrepreneurialism, the home to startups and professional sports, and a national park only 15 minutes away.

Now, many of these students come with no intention to practice law; rather, they want a legal education in a professional setting so that they can take those skill sets and the contacts we can provide to the industries in which they want to work, such as health care, business, government, energy and others. These are fields in which a JD gives them an advantage.

And the JD they earn here at Akron Law emphasizes hands-on experiences. We hear a lot these days about experiential learning. Akron was doing that many years ago with students well before the 3L year and not simply through internships and externships. Most classes have had some means for involving students in a hands-on way in the legal process. Our re-entry clinic, available to 1L students, was recently named one of the most innovative clinics in the country.

Health care law is a particular strength here, thanks to Professor Katharine Van Tassel, who directs our Public Health Law and Science Center (PHLSC) and the Health Law Program. She has, for example, about 12 students working on materials for the U.S. Commission on Civil Rights regarding access to health care. We have a specialty certificate in health care. We’re discussing whether we’ll eventually offer a joint law-health care degree.

I’m developing several international programs including an international business law course, which I’ll teach using mock negotiations and various technologies. We’re instituting a special program for foreign attorneys and foreign law school graduates in which we’ll accept a year’s worth of credit from their own law degrees. They’ll be able to earn a JD, not just an LL.M., in two years here. At the same time, we’re developing cutting-edge study abroad programs for our students.

We are offering a new joint degree of law and forensic accounting. Our reasoning was simple: In today’s world, the incidence of fraud is rife. We want to equip future attorneys with the knowledge and insight to know where to look for fraud, how to identify it, how to know when clients are or aren’t committing fraud. Of course, forensic accountants will be better qualified if they know the applicable segments of law.

These are skills that our graduates could apply immediately on leaving law school; skills that they can immediately apply without further training – and fewer employers these days have the luxury of time when it comes to training new hires.

MKW: Spending quality time with my family, which now includes a grandchild, is something I cherish above all. I’m so indebted to my wife, Noriko, for taking care of what’s most important in our lives – our children – and doing it so beautifully.

Our 21-year-old, a music educator, is married and, as I said, presented us with our first grandchild. Our 17-year-old and 15-year-old love sports, especially baseball and basketball. I especially love playing basketball and other sports with our law students.

On a personal note, our 13-year-old was recently diagnosed with a rare form of cancer. We were very fortunate in that it was caught early and the tumor was removed. While he’s undergoing treatment in the hospital, Noriko and I play a kind of team tag to help him fight this unfortunate battle.

Which brings me to something amazing about us coming to Akron Law. There are only 12 hospitals in the United States that primarily specialize in treating this kind of pediatric cancer. Akron Children’s Hospital, which is 15 minutes from our home and 3 minutes from my office, is one of them. Another reason Akron is a perfect fit — great medical care and wonderful people.