Much of the legal career of Lucy S. McGough, Dean of Appalachian School of Law, has pivoted on her being in the right place at the right time with people who believed in her talents: her own choice to pursue a legal degree, for example, as well as her acceptance at Emory University School of Law. 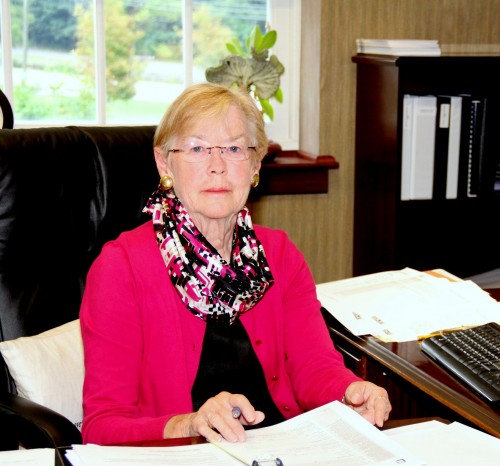 As McGough (pronounced McG-you) recounted in a telephone interview, she was a student at Emory University in Atlanta heading for a Ph.D. in English – until she ran into a woman who had graduated three years earlier and was in the midst of the same degree. The subject of the woman’s proposed dissertation: a minor British poet, Edward Bulwer-Lytton, he of “It was a dark and stormy night” fame.

“That’s when I decided against devoting my life to something that seemed so narrow and arcane,” McGough said. “I wandered over to the Emory law school and ended up talking with Ben Johnson, the dean, who on his own authority could and did offer me a place there. He told me, ‘Go for it. And by the way, you start on Monday.’” She was one of three women in the entire law school.

A similar happenstance led her to become Appalachian’s dean. McGough and her late husband, Jim, were planning a sabbatical from Louisiana State University Law Center, where they were both employed. She suggested Appalachian School of Law, whose faculty had impressed her profoundly when she served on the review committee for ABA re-accreditation. “I wrote to ASL about two teaching positions,” she said. “They wrote back, ‘Thanks but no thanks,’ then called a day or two later about the deanship.” With her appointment in 2012, McGough said, “I think we both were lucky.”

LAWDRAGON: What steered you into legal academia in the first place?

LUCY S. McGOUGH: I had been in practice for almost five years and found that change in the legal landscape came about slowly, very much one case at a time. I saw teaching as a way to influence entire generations of students. I’m an instrumentalist; I like to make a difference. I was able to answer, “Yes, I’m making a difference” far more often in teaching than when I was practicing law.

Why I began my teaching career at my alma mater is in part a function of the time. I was a Ford Fellow at Harvard Law, where I earned an LL.M., and the Emory faculty encouraged my application for teaching. I think their encouragement reflected the fact that law schools then – this was 1972 – were more comfortable with women faculty members whom they knew and had, essentially, vetted. I think you would find many women educators working at the law schools from which they graduated. But part of my starting at Emory involved my being more comfortable there because legal academia was a high-risk profession, especially for women aiming at a tenure track. I knew I would be given a fair shot at Emory. It didn’t hurt that I loved Atlanta.

LD: What challenges do you face at Appalachian Law and how are you meeting them?

LSM: I’m going to answer your question in terms of our mission, who our students are and how we’re striving to better support and enable them. Our mission is to offer opportunity to enter the legal profession or allied professions for people most of whom wouldn’t otherwise have that opportunity. This is a niche that no one else serves: These are people who are poor test-takers; or they are older students who haven’t taken LSAT-type of tests in a very long while; or they’re holding down two jobs to support their families and can’t study as concertedly. Many – certainly the core of our student body – are in the six-state region. And they are a high commuter population, people who drive up to two hours from various directions to get here.

That’s why we do full-file, holistic reviews of every applicant to determine whether these students, despite their test scores, have the wherewithal to succeed.

So, yes, we accept those whom others would consider higher-risk applicants. But we’ve had extraordinary success stories with what economists would call outliers: One woman, for example, who scored 139 on her LSAT graduated first in her class and passed the bar on her very first try.

We also see as our mission graduating people who will bring their skill sets back to their small towns. And yes, there are still towns in the U.S. where lawyers go home for lunch; where they are the only lawyers in town and central to the lives of the people there and to the life of the community. So, again, our graduates may be solo practitioners, but it’s a law practice and a lifestyle I’m comfortable providing to our law students and graduates. We also have lots of students who go into local government where they use their law skills as community problem solvers. In that respect, we hear stories all the time about our graduates and their towns thriving.

What are the challenges, then, of serving these students? Given the commuter nature of our student body, we’ve put a priority on getting online programming up and running so that students can take some classes remotely so that the time and cost of commuting are reduced. We’re increasing outreach on our master’s degree programs, understanding that for many of our students, improving their opportunities for better jobs and higher salaries may not require the full J.D., which is an outlay of large sums of money over three years. A focused, intensive one-year program – such as our 13-course natural resources certificate, public health law or alternative dispute resolution certificates – is what such students may need.

We’ve also totally revised our curriculum to better track how students are doing before they head into final exams. At one extraordinary meeting, every faculty member agreed that we needed to increase our mentoring along with feedback to each student on how she or he is doing, where they need help or counseling. I think that our short-term bar-passage statistics – which are below the state average right now – will quickly reflect our efforts. Those rates, by the way, are first-time bar-pass rate for states in which most of our students took that exam. Our so-called ultimate bar-passage rate – reflecting the percentage of students who passed the bar exam within five years of graduation – is 89.9 percent.

Another challenge of a different sort has been sticking by our guns and making a large number of our courses required. There have been times when legal academia considered law schools too rigid if they didn’t give students considerable leeway to select their own menu of courses in the second and third years. We see requiring courses as a way to prepare our students for the bar exams in our six feeder states; these required courses are all subjects on those exams. It’s also a way to better ensure that our students can handle the variety of work that would come their way in small town practices. So for example, you may not be interested in family law. Maybe this course will change your mind, maybe it won’t. In any event, you may need it when you start working in your community.

We’ve talked about lowering tuition, but it’s not as straightforward a benefit as it would seem. Instead, we have improved the availability of scholarships, reserving $1 million every year for both need-based and merit-based awards. Many, if not most, of our students pay substantially less than the $31,000 full-freight cost of tuition

Our career services is encouraging more potential employers to come to campus, and we facilitate all interviews. Our alumni are most generous in their offers to create a strong network for our graduates, and we track our alumni and their careers.

We now require all students to experience an externship, which is a great path to employment after graduation and, at the very least, a resume builder. More than 600 externships have been identified, including working as a district judge’s clerk, at the Alpha Energy Company or at the Environmental Protection Agency in Washington, D.C., where we have four positions available. And we are offering living expenses to students for whom the location of an externship, such as the EPA, poses a high-cost barrier.

LD: You’ve touched on this already, but what distinguishes your institution from other law schools?

LSM: Our students are remarkable. They are grateful for being here and hungry for knowledge. Everybody – students, faculty, staff – is engaged and prepared. I think that’s why the teaching experience here is so fabulous. And I say that as a dean who still teaches one class each semester.

What impressed me, too, is that the faculty is very supportive of the students; they care that the students succeed. No one here is tied up with whether we’re first-, second-, third- or fourth-tier. When you deal with students who have lower predictors, like low test scores, you have to try harder. This faculty and staff do. There has always been that kind of community atmosphere here.

And it’s not just that we have a low faculty-student ratio or that faculty members are approachable. Appalachian is also a social community: faculty, students, trustees get together all the time. We do many things together as a school. I think of it as the “Cheers” effect – everyone here really does know your name.

It’s particularly tough to maintain that kind of culture and commitment in what is a predatory environment, with law schools scrambling for students – for our students – as fewer people are applying to law school. It’s been a struggle to keep our numbers up while keeping quality high. It’s tough, too, trying to make the curriculum flexible enough to meet the needs of our students who go out into small towns and solo practice or who seek other forms of practice.

LD: Is there anything you wish you had known before becoming dean?

LSM: That this downturn in students applying to law school would last as long and be as deep as it has been. I wish I had known that I’d have to spend so much time on budgets. It also would have been good to know – and be a bit more prepared for – the range of issues on which my counsel is sought. I didn’t imagine that this job would involve such administrative complexities that would be as time consuming.

LD: Has anything surprised you in this job?

LSM: What a big deal some people think it is; far bigger than I have ever conceived it to be. As a corollary, I’m surprised that there is such deference for the position of dean.

LD: What do you do outside law school when you’re not being dean?

LSM: I’d love to say that I’m a shark fisherman or skydiver. In reality, I’m just as plain as can be. I love gardening, cooking, reading and playing with my dachshunds – Buster, Beowulf and Moonshine.

I also try to keep up with my seven adult children, not a single blessed one of whom is a lawyer.