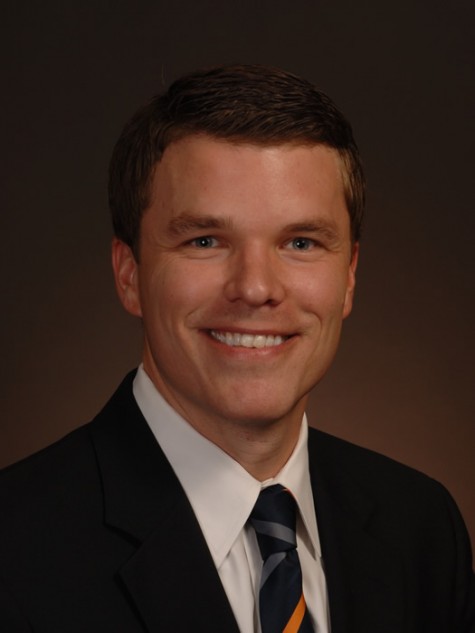 Terry McManus’s career in fund-raising began with a college internship on a losing Senate campaign.

Because his candidate, then-Democratic U.S. Rep. Ron Klink, lagged far behind the Republican incumbent, Rick Santorum of Pennsylvania, McManus’s job included much more than the stereotypical coffee-brewing and copy-making: He did field work. He traveled to events with Klink.

He sat around a conference table with fundraisers, making cold calls to potential donors. “In some sense, that was the beginning of it all,” he said.

The work didn’t lead to a position in Capitol Hill policy-making, McManus’s career goal as a political science undergraduate at the University of Pittsburgh. But it did prove a natural fit for skills that he’s honed in the 14 years since and that will support him as Boston University Law’s new assistant dean of development and alumni relations, a post he began in May.

McManus arrived at a pivotal moment: the middle of a university-wide fundraising drive that has already garnered $720 million toward a 2017 target of $1 billion. Among the contributions was $18 million from Viacom Chairman Sumner Redstone to renovate the law school’s tower and add a new building, which opened this fall.

“While of course the central purpose of the campaign is to raise funds and to reactivate the alumni, I think it’s going to have much more long-term implications because it’s really given us the opportunity to reconnect with so many people from whom we perhaps had gotten away over time,” McManus said. “I don’t think that’s going to change, even after we’ve popped the cork and celebrated.”

McManus’s route to Boston was a circuitous one, partly because he didn’t give up on his college dream of working in politics when Klink was defeated. He had figured that one way into a Capitol Hill position, for a newcomer, was “to work on a campaign, win the campaign and get a job.”

So after graduating from Pittsburgh, McManus said, he continued to do campaign work and became more and more involved in fundraising “because that was where my talent and experience led me.”

It was after he married, and he and his wife were expecting their first child, that McManus contacted his sponsor from the Senate campaign internship, who had become head of major-gift fundraising at the United Way in Pittsburgh. She offered him a job at the agency, where he remained through 2007.

Afterward, he worked at the Arizona State University Sandra Day O’Connor College of Law, where he was executive director of institutional advancement through 2011. He then moved to the Phoenix-based nonprofit Translational Genomics Research Institute, or TGen, where he was vice president for strategic initiatives before leaving for Boston.

LAWDRAGON: What drew you into legal academia?
TERRY MCMANUS: Toward the end of my tenure at United Way, I had started working on a master’s degree in nonprofit management at Robert Morris University, and caught that bug again, being back on campus and back in school. I also had lots of friends who were either leaving politics and political fundraising, or leaving the nonprofit sector to go to one of the many universities in Pittsburgh. All of that led me to want to get to a university.

At the same time, my wife’s company was moving us to Arizona. There was a great opportunity with her company there, so when we moved, I focused on attaining that goal of working with a university. I really wanted to get into Arizona State University. I landed as director of development at the Sandra Day O’Connor College of Law and moved up to executive director of institutional advancement. I did that for nearly five years, and really just loved being on campus, loved the university environment.

From the law school perspective, it was rather serendipitous that I ended up there: My mother is an attorney by training, and I’ve always had this tremendous respect for the ideal of policy and government and the things that make our country and our system what they are, and then, by extension, the profession of law. Had I had more time and been able to do a law degree, I probably would have gone on that route. As it turns out, I ended up finishing my master’s in nonprofit studies at Arizona State and later did an MBA at the University of Arizona.

LD: And eventually, you decided to come back to the East Coast?
TM: The call to come back East has always been there for us, I’d say. I’m from Pittsburgh originally, and my wife is from Boston. When this opportunity arose, it just seemed to fit so perfectly with what we had hoped to do, knowing that Boston University was in a big fundraising campaign, and with all of the excitement swirling around the law school getting a new building, that there would be a tremendous groundswell of interest in that.

I learned through the recruiting process that BU Law had a large and really robust alumni group, employed everywhere from big law firms to great corporations, but that maybe they hadn’t been brought together as much as they could be. That was really appealing. There’s a lot of opportunity here, even though it’s a big name, well-regarded law school.

LD: What’s your sense of how declining enrollment has affected the fundraising environment?
TM: I don’t know that the priorities have shifted greatly over the years when it comes to what many law schools are trying to raise money for. At BU, of course, a tremendous amount of energy and time has been put toward the Redstone building (which opened this fall), because obviously there was a deadline, with shovels in the ground and cement being poured. The law school’s fundraising commitment toward that was a high priority. And the building wasn’t just a priority for the school or for the university. It really seemed to be a priority for the alumni and the students.

There had been some consternation around the facilities for a long time. There was a top-notch faculty throughout our entire history, but you’d hear stories about how the elevators (in the old 17-story law tower) would break down, and it was difficult getting from class to class. So it was a real priority that was being addressed for the alumni and the students, which is good. Fundraising also supports all the things that really make a law school great: continuing to have the resources for faculty and trying, as enrollment goes up or down, to find a way to make school affordable for the students who are coming here.

Obviously, tuition has to be what it is to support the cost of the university and of the law school, but we recognize that that can be a tremendous burden for incoming students who might not have the means. If they are qualified to come to BU, we want them to be at BU. To the extent that the tuition and the cost of living in Boston, which frankly is not an inexpensive place to live, make that difficult, finding funds to alleviate some of that has always been and will continue to be one of the top priorities.

LD: What challenges do technological advances, job-market fluctuations and an increasingly global economy pose?
TM: For development and alumni relations, the most important thing we can do is keep relationships strong among our alumni. That provides a variety of benefits, both for the school and for the alumni. We don’t want to be seen as just the group of folks in the law school who come out every year and ask for more money. We want to provide value for everyone. We want to make sure that even after, and long after, you’ve graduated from BU, that we’re providing value in the form of strong alumni relations and strong networks.

Particularly for folks who are outside the Boston area, who aren’t within close proximity to the school, we want to make sure that we’re keeping up with who is in which firms and who is in which government agencies and what type of law they’re practicing and in what setting so that when a new graduate is coming out, we know who to connect them with. Or when an alumnus is looking for a new job, we’re able to say, ‘Here are some fellow alumni who are really plugged into the area of practice that you’re interested in, that you can connect with.’

To the extent that we can keep that strong, we know that there will be returns for us because alumni will continue to see that value and understand that supporting BU is an important thing, and not just with their treasure but with their time and with their talents as well.

The ways in which we have to do that are changing: At BU, we’re really a national, and now becoming an international, law school. We have a large number of alumni not only in D.C. and New York, but in Chicago and on the West Coast as well as many alumni in China and growing number in Europe. There are lots of ways that not just my office, but our career development office and admissions are all working together to create a sense of a good robust community and network. One benefit to being a BU alum beyond that tremendous education that you get is that robust network and community you have when you get it out.

E-mail was the hot, cool thing when I was coming up through school, but now, younger generations barely use it. They’re turning more toward social media and more immediate digital communication on their smart phones.

LD: And social media plays into that as well.
TM: There are so many platforms out there that people are using, just picking the ones that are most applicable to our alumni and to the faculty is important, along with making sure that we’re using them effectively. And understanding, too, that some people will be in those spaces and some people won’t and making sure that we are balancing our communications across the older, more traditional platforms up through newer ones showing up on a daily basis.

It’s a challenge to keep up with that, but it provides a tremendous amount of opportunity to get people connected, and in the way that they want to be, as opposed to having to print a big alumni directory every year that’s out of date a few weeks after sending it out, which is how things were done in the old days. Now people can get real-time connections on LinkedIn for a more public view. For more smaller, private groups, they’re turning to Facebook to stay in touch with one another. Twitter’s a great way, in particular, to spread news fast. Each of those platforms has a different purpose and each of those platforms is used in a different way.

LD: Your position obviously requires a significant time commitment. What do you do when you’re not working?
TM: By far, the No. 1 thing is finding time to hang out with my kids. My son’s playing hockey and my daughter’s doing gymnastics, so to the extent that there’s a game or a practice, I’m always trying to make sure that I’m there. I do enjoy golf, so I’ll have to get used to being a seasonal golfer again. The occasional vacation with the family is always tremendous.