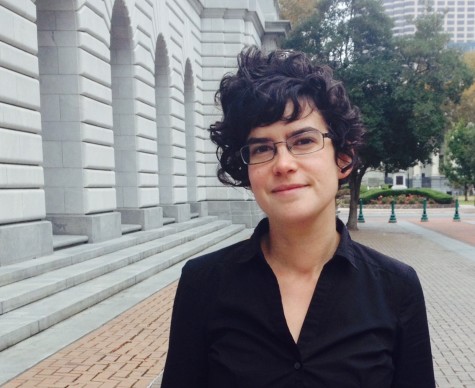 What she didn’t expect was the profound effect of a clinic unique to Northeastern, one based on the principle that justice delayed 70 years or more is justice denied to many generations of a family.

As Adams described it, under the direction of Prof. Margaret Burnham, the Civil Rights and Restorative Justice Clinic has engaged her in a kind of legal archaeology with a powerful, contemporary human dimension as she investigates racial killings in the Jim Crow South from 1930 through 1970, then, in consultation with victims’ families, develops restorative justice programs for each case.

“This is so different from a typical law school clinic,” Adams explained in a telephone interview. “You’re looking at cold cases for which there are usually no legal remedies, since many if not all of the perpetrators are dead. Or the victims’ families don’t always want to prosecute.”

For students who are always looking at the law for solutions, Adams said, “We’re being asked to look outside the law to help families with closure; to signal to them that this victim, their loved one, mattered, and to insert their stories for all time into the historic record.”

LAWDRAGON: Why did you, a theater-art history major, decide to attend law school?

HANNAH ADAMS: I moved to Louisiana after college to support the reconstruction efforts that followed Hurricane Katrina and was quickly caught up in fair housing issues, as folks were organizing against the demolition of the city’s public housing.  I also started doing intake and “know your rights” training for a local fair-housing organization. It became very clear very fast that the people with whom I was working had to interact on a daily basis with the legal system. And by participating more in community organizing efforts, I became more aware of how the legal system can be both a tool for and a barrier to social change. That’s when I decided to go to law school, so that I could work effectively in something about which I had become passionate – assisting folks in navigating the legal system in support of social justice movements.

Now to my mind, my interest in the theater made my decision make even more sense, or at least less surprising. I’ve always been involved in the production, stage management side of performing – all the behind-the-scenes work. In some ways, the role of community organizer and the role of the community lawyer are like that, too – being behind the scenes, supporting the people on the ground. Both certainly require you to think creatively and work cooperatively.

LD: What factors did you use to choose your law school?

HA: I knew that I’d thrive in a relatively small school where professors really want to teach and where I would become part of a network of classmates who support each other throughout their careers. And that’s definitely true of Northeastern. But I chose the law school primarily because of its devotion to public interest law and its social justice mission. I wanted to be in a community of professors and students with deep, longstanding commitments to movements for racial and economic justice. I wanted to be challenged to use the law creatively in the service of social change.

Not only did I think I would get the best public interest education at Northeastern, but I also knew that Northeastern has an expansive and robust network of alumni – and fans! – in public-interest organizations around the U.S.

I grew up in Wellesley, Massachusetts – close enough to Northeastern University School of Law to know its reputation for being singularly committed to training the next generation of social justice lawyers. But that wasn’t the deciding point. Down in Louisiana, every organization, every lawyer and legal worker I respected, every public interest person whom I considered smart, savvy and effective were either graduates or said I needed to look to Northeastern if I wanted to pursue a career in social justice. It turns out that the law school has a reputation nationally.

Then I visited the campus and immediately knew that in terms of the kinds of students who come to the law school – these were people with whom I could be friends and colleagues.

I also mentioned getting the best public interest education at Northeastern. I had two reasons for thinking that, aside from the reputation of the law school and its graduates: First, all 1L students at Northeastern participate in a yearlong program called Legal Skills in Social Context. Students learn the skillsets – and these are skills that need teaching – to work together effectively as a legal team. Then they apply what they’ve learned to a legal research project for a community-based or public service organization. Frankly, I don’t know of other law schools where all first-years actually practice basic lawyering – conducting research, writing documents, making presentations and oral arguments, engaging in critical analysis – in a collaborative, real-world setting representing actual client organizations.

Second, all Northeastern students participate in the law school’s Cooperative Legal Education Program. Where most law students can choose to do two internships, usually during the summer, Northeastern’s students do four, starting during the summer after 1L when each student begins rotating between classroom and co-op assignment every three months. And you get academic credit for each co-op. And you’re not alone: Students are not just mentored on these jobs, but they are also in constant touch with their advisers and can draw on all the resources of the law school – the expertise of its professors, the research library and the other students.

What proved to be very attractive for me, too, was the ability of 2L and 3L students to choose their co-ops. I realized that I might be able to go on coop with organizations for which I’d actually like to work after graduation – which is precisely what I did. In the end, then, Northeastern made the most sense for me, personally and professionally, because I knew that I would get a lot more hands-on public interest legal experience than anywhere else.

HA: I have been so happy at Northeastern that I am now ashamed to admit that I looked at law school rankings and was tempted by some of the higher-ranked law schools that accepted me. I wish I had had the guts to singularly focus on the most important thing for me: finding the school where I would get the best education as a social justice lawyer and have the support of a strong community while in law school.

Rankings don’t measure what places like Northeastern do well. They certainly don’t tell you what the best law school would be for you – what fits your needs and career goals. Yet a lot of students get their LSAT scores and their GPA and get sucked into this idea that they should go to the highest-ranked school that says, “Yes.”

I know, too, that you can’t rely on rankings when it comes to not just the cost of your legal education, but its value personally and professionally. That’s something that every would-be law student really has to research and carefully consider.

Here’s my advice, then, to would-be law students: Have the guts to ignore the rankings and look at the comparable qualities of different schools in terms of what you need and want – absolutely think about how you can pay and what you can afford – but make sure to choose a school where you will thrive.

HA: By far that would be my working with ProfessorMargaret Burnham in the Civil Rights and Restorative Justice Clinic. I had the opportunity to research the police shooting of a young African-American man, Prentiss McCann, in Mobile, Ala., in the 1940s, a homicide that was never prosecuted and never explained. And then I was able to connect with his surviving family, to tell them what happened to this man and to talk with them about restorative remedies.

Prentiss McCann’s daughter had been trying for years to find information about what really happened to her father when she was an infant. The police at the time said it was self-defense. With the help of Northeastern and Professor Burnham, I was able to piece together the story and share it with the family.

Since then I have worked with students to investigate four other cases of black military personnel in Mobile who lost their lives to racial violence during World War II, and we are partnering with a history museum in Mobile to feature their stories and honor their families with an exhibit.

We’re spending days exploring all sorts of archives some of us didn’t even know existed, filing FOIA – Freedom of Information Act – requests to federal agencies, speaking to the relatives of witnesses in case stories were passed down to them, and more – all in the cause of a different kind of social justice. I learned, for example, that the Mobile NAACP had actually investigated Prentiss McCann’s death and had spoken to witnesses; that it tried to use a new Supreme Court ruling to hold accountable the police officer who shot him. Based on those efforts, the Justice Department instructed the FBI to investigate the murder, and then ultimately decided that the case didn’t merit action because it would be difficult to disprove the police officers’ explanation of events.

I saw how the federal government failed to properly investigate. I saw how newspapers printed lies and untruths, adding another level of violence done to this family. And I realized in a profound way that this family needs to know that Prentiss McCann’s case was important; that Thurgood Marshall as a young lawyer was interested in this case; that their loved one was of value – his life meant something to a lot of people; it figured into the lives of people working for racial justice in that period.

What more can I say except that as someone who came to law school to do civil rights work, my participation in the Civil Rights and Restorative Justice Clinic has been an incredible rewarding learning experience.

HA: Honestly, I was surprised that I have mostly really enjoyed it. I’ve had a lovely, eye-opening experience meeting people who will be my colleagues and friends for many years. I’ve connected with professors who will always be a part of my career and life. I’ve taken classes that have enhanced my powers of analysis and sharpened the way I think about the world. Those are a lot of benefits I might have hoped for but didn’t expect.

HA: I plan on returning to Louisiana to do housing justice, anti-poverty and civil rights work after I graduate. One advantage of Northeastern is that I was able to co-op at the organization with which I want to work after I graduate. I could actually build relationships and see whether we are a good fit, while gaining valuable substantive and technical legal experience.