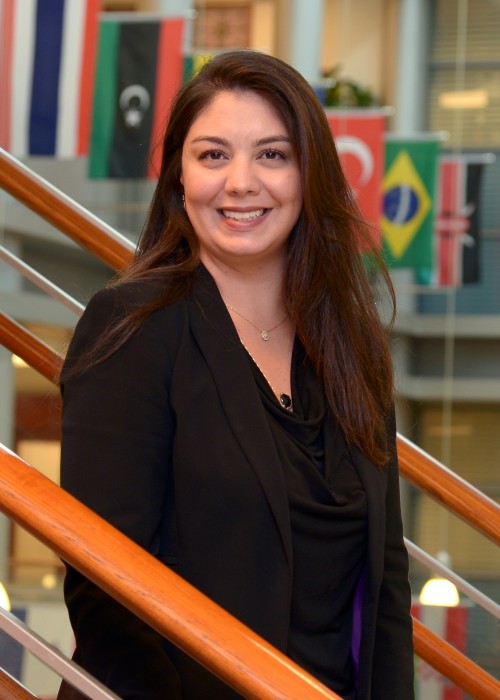 It was Fernanda Beraldi’s career as an in-house counsel at aircraft-maker Embraer SA that led her to  Indiana University Robert H. McKinney School of Law, where she’s earning an LL.M.

Beraldi, who knew she wanted a master’s degree in U.S. law, had narrowed her search to Chicago and Ann Arbor, Michigan. Then a year ago in February, she came to Indianapolis to meet with a client about the sale of a pre-owned airplane.

“I was very impressed with the lawyers with whom I had to work,” she said in a telephone interview. “They were smart, professional and cooperative while at the same time advocating for their client. They weren’t trying to batter us into submission, but rather with every word were clearly trying to get a fair deal done.”

It turns out that not only were they all Indiana lawyers, but they all had attended the McKinney School of Law.

At the same time, Beraldi liked what she saw of Indianapolis.

“It wasn’t too expensive,” she said. “It had a concentration of businesses and law firms and judicial institutions in an easily accessible downtown; there was a cultural life and there were these lawyers whom I knew and who subsequently have become friends.”

Last May, Beraldi returned to meet with a supplier. On her one free day she visited the law school. “I hadn’t scheduled an appointment,” she said. “I just went. Noah Joseph, associate director for graduate admissions, was able to show me around. I had a great impression of a lovely campus. I saw, too, how close it was – a few minutes walk – to the downtown. And what Noah said about the law school, the professors and courses for foreign lawyers in the LL.M. program made it sound very attractive. When I told him that I would be dependent on scholarships, he said that given my background and qualifications, if I was accepted, then McKinney’s offer would be competitive. I decided that night to apply and, soon after, if I was accepted, to attend.”

LAWDRAGON: Why did you decide to go to law school in the first place?

FERNANDA BERALDI: I actually went to medical school for six months and quit. I had wanted to be a neurologist since I was a kid, even though both my parents are lawyers. I passed the test and started medical school, living what I thought was a dream come true. Then I realized that with the first patient who died in my care, I’d die, too. I’m very result-driven and so wanted – and needed – another way of helping people. I knew that the law would provide such a way.

LD: Why go beyond your Brazilian law degree and earn an LL.M. in the U.S.?

FB: That was a different decision-making process. I was a 12-year licensed lawyer in Brazil working for Embraer SA, the world’s third-largest aircraft manufacturer, mainly dealing with cross-border transactions, aircraft leasing and aircraft repossession internationally. Most of the law used in the field is U.S. law, and I was doing very well with it. But I wanted to deliver better value to my internal clients at Embraer by understanding the theory behind the practice. The best, indeed the only, way to do that would be to attend a U.S. law school.

LD: What were some key factors you used to zero in on a few law schools to which you would apply?

FB: I started with geography and cost. The East Coast would be too expensive for me. The West Coast was too far away for me to even occasionally visit my family. Florida was a no because I was coming from South America and wanted to experience pure American culture. I focused on the Midwest and, in particular, on Chicago and Ann Arbor, Michigan. Indiana later became a third possibility. For all my target law schools, I was also alert to how much I could get in scholarships. I had to quit Embraer to come here because the company doesn’t offer its employees unpaid leave.

Embraer, by the way, was very supportive. My bosses were very pleased with my work – I had been there six years – and recognized that I was expanding my experience and my knowledge, trying to bring more value to the clients I represent. And they have left the door open to me coming back. But the reality was that I have a husband and a 7-year-old son and together we had to be able to manage my law school education financially.

LD: Six months in, what do you think of McKinney as a school for international students?

FB: The law school embraces diversity and actively works to ensure there is diversity throughout the classes. It makes international students feel a part of a large multi-cultural family, with programs and events that have us mingle with the rest of the students. We take courses together with the J.D. candidates.

The deans and professors know me by name; they know my family by name. And they actively support my career. I applied for and secured two internships, for example: One is with state Supreme Court Justice Steven H. David, where I write memoes and provide background for his decisions on accepting cases from lower courts. He’s an amazing mentor. A veteran and former chief defense counsel at Guantanamo Bay, he has taken the time to help measurably improve my writing. The other internship is with Eli Lilly & Company, the pharmaceutical firm. It has subsidiaries around the world, including one in Brazil. I’m helping the company bridge Brazilian law and culture and American law and culture.

The school has provided me with excellent opportunities to deepen my knowledge and to improve my skills. Some of this has to do with how the faculty link classroom learning with the reality of the law playing out in people’s lives every day. Here you can study the law, then you walk down the street to the legislature or the courts, to state agencies and attorneys’ offices and you see the law in action. You hear legal issues debated – serving alcohol on Sundays, same-sex marriage and more. You see them voted on and either defeated or adopted and enforced. In Indianapolis, you see the lobbyists, the displays of people advocating for and against a bill. You see it all.

For me it’s particularly revelatory, because Brazil follows civil law while Indiana, like most of the United States, follows common law. Even the language of law differs.

There is an added advantage for me being a lawyer in this state. The rule here is that while foreign lawyers can’t take the state bar exam, if you have more than seven years experience, you can work as in-house counsel – as long as the employer sponsors you and you have what they call a business counsel license. There are some things that you can’t do – litigation, for example, or trusts and estates. But the business side of it you can do.

LD: You were accepted at all three schools to which you applied. How did you finally decide?

FB: Chicago had lots of requirements for me to fulfill to live there. Ann Arbor is more of an education-, university-oriented city as it’s not the state capital,  although it would have been a bit easier on my family. (My husband, Rodrigo Morais, is an automotive engineer and transferred to his company’s offices in Detroit so that we could all be in the same region of the United States.) Indianapolis has all the attractions of a state capital and is truly business- and law-centric, with law firms, the courts, business offices – even one of my former Embraer clients, Republic Airways – concentrated and easily accessible in its downtown. Our son, Erick, loves it here. And McKinney Law offered me the best scholarship.

FB: Yes, at least at this law school – the involvement of the alumni. I knew that most of the people practicing here graduated from McKinney. That was part of the allure. I didn’t know how involved they are in the school and its students. I was asked to speak to the Board of Visitors, which comprises a number of alumni. So, there I was speaking about the LL.M. program, my experiences and some thoughts on improving it, when one of the board members asked me what I wanted to do with my life. We spoke briefly about my history and work. The next thing I know, he’s putting me in touch with Eli Lilly & Co. That wasn’t my intent in going to speak, to make that kind of connection. But I was told that that’s the kind of thing that happens frequently at McKinney.

FB: There are three different moments that have been remarkable for me: when I was invited to speak in the International Student Speaker Series promoted by the law school in my expertise area, aviation law; the externship opportunity with Justice David at the Indiana Supreme Court, and my externship opportunity at Eli Lilly’s legal department, which is a very important company in terms of innovation and science.

The Speaker Series, by the way, is an opportunity for international students to talk about the laws in their own countries. In my case, there had been Brazilian lawyers in the LL.M. program before I came. So I volunteered to talk, instead, about aircraft repossession: People lease a lot of planes and when things go south, you have to be able to repossess the planes worldwide. I had lots of stories about doing this, which are instructive since there is no one recipe.

FB: I am planning to sit for the July 2015 bar exam in New York State, since for now I want to practice law in the U.S. as in-house counsel for a large corporation. And as I said, Indiana doesn’t allow foreign lawyers to take the state bar, although I do qualify to practice here as in-house counsel. It doesn’t need to be in aviation. I recognize that having worked on transactional issues for an international corporation, my skills are very transferrable.

I’ve been invited to speak as a guest lecturer at Ole Miss law school on March 16. I’ll be talking about aircraft leasing and repossession, which is a real honor since that law school has what I believe is the only aviation LL.M. program in the U.S.