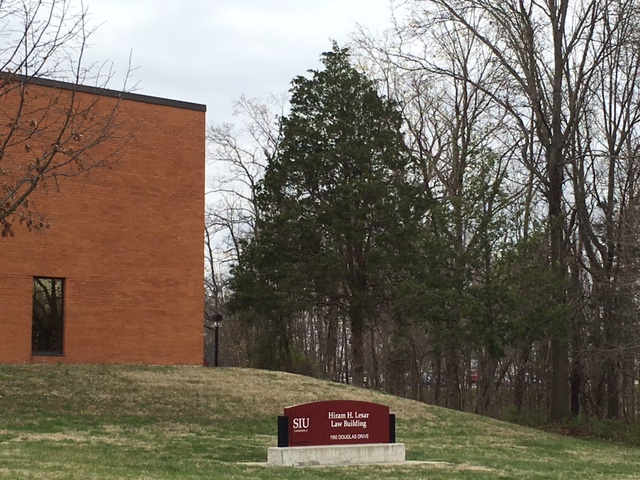 Heading to Carbondale, Ill., was a turn home during the Law School Road Trip. Growing up near Champaign-Urbana, SIU was always known as a party school, and for its proximity to Marion prison. The intervening years have not been kind to the region, which is resolutely hardscrabble. Students come to SIU Law School seeking the opportunity for a more stable job and some options in life. It’s bracing to visit the campus and see the busted-out windows of dorms covered in raw wood, and to read of the Saluki Food Pantry that’s opened on campus to help out with the number of students who can’t afford to eat.

But that’s reality, and a far cry from students who agonize over whether to attend Harvard or Stanford and which fancy firm to join. For a lot of law students, schools like SIU provide at least the hope of a better life. Take, for example, Victor Feraru, a 2L who was shuttled between 40 foster homes and three group homes in the first 17 years of his life. Born in the Peoria area, he didn’t think he’d live past 18. He got his college degree in North Carolina, was adopted, wrote an award-winning piece, “Transcending Trauma” (as Victor Lopez, his pre-adoption name) and is now a member of the Children’s Justice Task Force of the Illinois Department of Children and Family Services, which once oversaw his care.

SIU Law School does its part, offering very low tuition for residents (non-residents pay $43,922). And the school will pay you to attend – 99 percent of students receive scholarships. The school excels at health care, IP and business training. It offers clinics in civil/elderly law; domestic violence; and juvenile justice.

The school is one of the most male-dominated around, with 62 percent of the students being male; 26 percent are minority. The school typically draws students more from the St. Louis region (which has a fine school or two) and nearby Southern neighbors. There are not a lot of jobs in this region, yet SIU manages to place 83.8 percent of its students in jobs. Of the 83 recent graduates that got jobs, they join: law firms (40); business (21); government (17); public interest (2); clerkships (1); and academia (1). The firms they join are: solo (1); small (32); medium (4); and large (3).

If you’re considering SIU, focus on which bar you’ll take and make sure to get lots of bar prep. In Illinois, the school’s pass rate is well below other schools, at just 67.2 percent (the bar average is 80.8 percent). A number of students also take the Missouri and Kentucky bars.

The irony of how much poor areas need justice – and lawyers to provide it – is written all over the faces of students at schools like SIU. Deans and other leaders of these schools often struggle to meet standardized metrics while counseling students aware that each and every one who makes it through is a huge success.